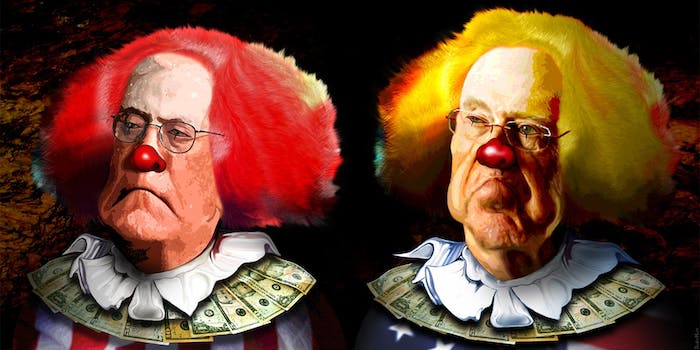 Charles and David Koch, everyone’s favorite rich, conservative duo to hate, have made no secret of their plans to purchase something far more powerful than Koch Industries: the U.S. government.

Yes, according to the Washington Post, the Koch brothers are going to use their Freedom Partners business lobby to spend a cool $889 million—a mere $111 million shy of a billion dollars—on the Republican Presidential campaign in 2016.

The group has not seemed overly supportive of possible contender Mitt Romney, who is still smarting from his 2012 defeat, but the brothers seem to like other prominent GOPers like former Florida Gov. Jeb Bush, Wisconsin Gov. Scott Walker, and Senators Rand Paul (R-Ky.) and Marco Rubio (R-Fla).

Since the Republican Party has made little, if any, effort to portray itself as the party of stinking rich, privileged, old white men, it’s safe to say that any contender would be happy to accept the $889 million thrown his or her way by Freedom Partners.

To give you an idea of exactly how much money the Kochs plan to spend, here are 9 things you could buy with $889 million instead of a presidential election.

2) 889 million rolls of the cheapest toilet paper out there once you’re done with all those spicy potato soft tacos.

5) The Empire State Building (with about $200 million left over).

6) First-class, round-trip airfare from New York City to Tokyo for every single resident of Orlando, Florida

9) My friendship. Hell, my hand in marriage.