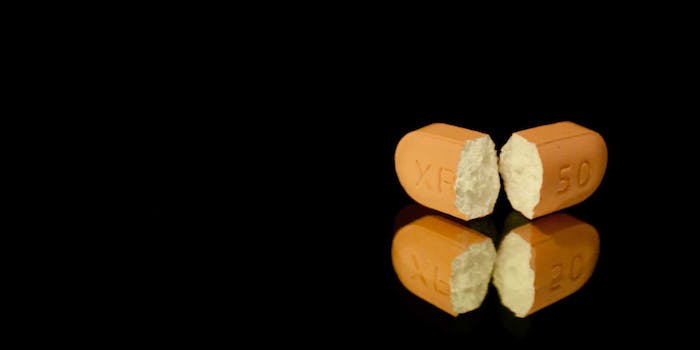 When you’re making a decision, they say you should trust your gut. If PayPal global head of developer evangelism Jonathan Leblanc has his way, that phrase will apply to your passwords, too.

During a presentation called “Kill All Passwords” that the PayPal head has been giving at recent tech conferences, Leblanc suggests that passwords—and even scan-based biometric systems like TouchID—will soon be a thing of the past. Our login information will exist somewhere in our bloodstream thanks to embeddable, ingestible, and injectible technology. Your credentials will fit in a pill capsule.

Even though in the scheme of things they’re quite new, Leblanc views external biometric measures like fingerprint or eyeball scanning as antiquated. He sees technology as integratable into the human body. Internal indicators like heartbeat and vein recognition could be the new security password.

Some of the solutions Leblanc describes sound straight out of a sci-fi novel. Brain implants and injectable computers probably lead to more concerns about what’s going into our bodies than what the technology unlocks for us, providing privacy through a means that potentially feels invasive.

Perhaps the most interesting suggestion is the pill form password that can be ingested. It would remain charged thanks to a battery that runs off of stomach acid.

The idea behind the biometric password, however it may find its way into your body, is not just to use next-gen technology; it’s to fix a security system that has been broken for the majority of its existence. Passwords and usernames are crackable and vulnerable, as is put on display nearly daily with hacks and leaks occurring, both on a small and major scale.

Even advancements in password technology—additions of location verification, two-step authentication, and even fingerprint recognition—can lead to false positives or false negatives, letting in unwanted access or locking out valid users.

Leblanc sees technology that takes hold under the skin as the best solution to this problem. He believes embeddable chips that monitor heart activity through ECG sensors, capsules that can detect glucose levels, and other similar tools will provide unmistakable personal identification methods.

This future of passwords may not be that far off. Leblanc is leading the charge at PayPal to advance identification technology, working with startups and hackathons to build new forms of biometric recognition. For every far-out sounding solution he presents, there is already someone out there working on making it a reality.

Though PayPal the company may not adopt the methods itself—at least not until they prove more viable and widespread—the company is positioning itself as a leader in the research.

In a statement to the Daily Dot, a spokesperson for PayPal-owned company BrainTree said, “We have no plans to develop injectable or edible verification systems. What is clear is that passwords as we know them will evolve and we aim to be at the forefront of those developments. We were a founding member of the FIDO alliance, and the first to implement fingerprint payments with Samsung. New PayPal-driven innovations such as one touch payments make it even easier to remove the friction from shopping. We’re always innovating to make life easier and payments safer for our customers no matter what device or operating system they are using. “