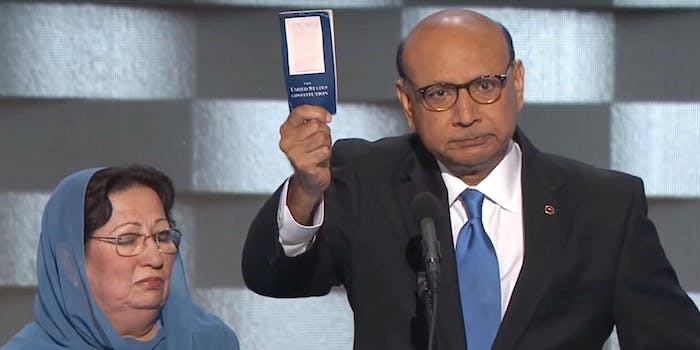 Khizr Khan is a Muslim American, and he’s made the greatest sacrifice a parent could make. His son, Humayun Khan, was killed by an exploding truck in Iraq in 2004. The U.S. Army Captain was awarded a Bronze Star posthumously.

On Thursday at the Democratic National Convention, Khan and his wife stood in front of the packed Wells Fargo Center and touted Hillary Clinton, who accepted her party’s nomination Thursday night. But Khan also had some pointed words for Republican nominee Donald Trump, who has vowed to ban all Muslims from entering the U.S.

What has Trump sacrificed, Khan wondered? Has he even visited Arlington National Cemetery?

“Have you,” Khan said addressing Trump, “even read the U.S. Constitution?” Pulling a copy of the Constitution, he added, “I will gladly lend you my copy.”