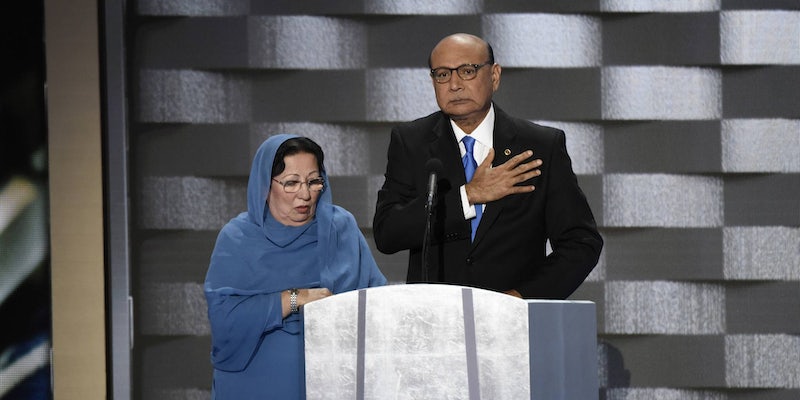 'The only thing that Donald Trump sacrifices is the truth.'

Khizr and Ghazala Khan, the Gold Star family who criticized Donald Trump’s plan to ban Muslims from the U.S. at the Democratic National Convention in July, have responded to Trump invoked their son’s name during the second presidential debate Sunday night.

Trump publicly attacked the Khans for several days after Khizr’s speech went viral. They were initially mentioned during the town hall debate by Hillary Clinton as one of several examples of how Trump refused to apologize for anything, especially in the wake of the 2005 Access Hollywood video where Trump brags about committing sexual assault.

And look, if this were just about one video, maybe what he’s saying tonight would be understandable, but everyone can draw their own conclusions at this point about whether or not the man in video or on the stage respects women. But he never apologizes for anything to win.

Trump later brought up the Khan’s son, Captain Humayun Khan, when asked about his proposed Muslim ban. While he tried to sidestep the question until moderator Martha Raddatz pressed him on it, he said that Humayun “would have been alive today” if he had been president at the time.

“Captain Khan is an American hero,” Trump said. “If I were president at that time, he would be alive today. Because unlike her, who voted for the war without knowing what she was doing, I would not have had our people in Iraq. Iraq was a disaster. So, he would have been alive today.”

“The only thing that Donald Trump sacrifices is the truth.”

The Khan family gave a scathing response to Trump after the debate ended. They stated that their son is a hero who gave the ultimate sacrifice and reiterated that Trump lied when stating that he didn’t support the Iraq War. And echoing a Washington Post op-ed that Ghazala wrote in August, they stated that he only sacrificed the truth.

“We know that our son, Captain Humayun Khan, is an American hero,” the Khans said. “We also know that Donald Trump is not telling the truth when he says he was against the Iraq war. Our son served this country with honor and distinction, and gave the ultimate sacrifice. The only thing that Donald Trump sacrifices is the truth.”

Jesse Lehrich, Clinton’s foreign policy spokesperson, was more blunt in his derision of Trump invoking Khan. (He later apologized for his choice of language and inappropriate nature.)

hey, @realDonaldTrump – regarding your claim that Captain Khan would be alive if you were president:

I want to apologize for the clearly inappropriate nature and language of this personal tweet. Sorry all.