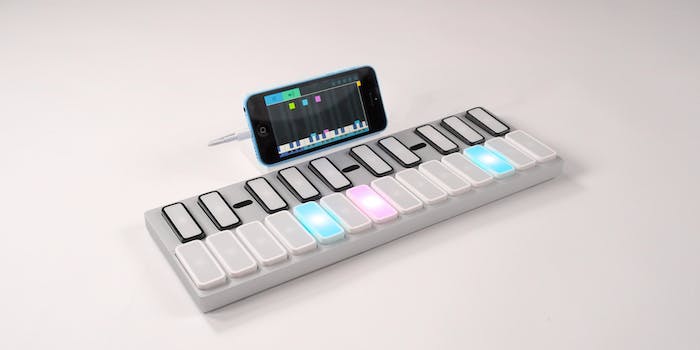 This gesture-based, LED piano teaches you how to play

The company behind the device wants to create 'an Internet for music.'

If my elementary school piano practices had more LED lights and a fewer “Chopsticks,” I might have stuck with it a bit longer. Opho is hoping their new take on a favorite instrument will make learning how to play the keyboard more engaging for tech-savvy youngsters.

Launching today on Indiegogo, Keys is a 24-key modular keyboard that uses LED lights, proximity gesturing, and an iPhone application to teach kids how to play the keyboard. Keys is the second instrument from Opho, the company behind the gTar, an electric guitar with LEDs along the frets to teach people how to play.

Inside the rectangular keyboard are a series of sensors that enable gesture control. You can turn the board on by clapping, and transpose (change the key of), the keyboard by swiping your hand left or right.

Magnetic edges allow the keyboard to be connected to an iPhone dock, as well as to other Keys devices to create an entire grand piano-length instrument. When connected to the iPhone, musicians can select a song, and the necessary keys will light up when they need to be struck. You can keep track of how well you performed, and select certain parts of the song that you need to practice. There are both sheet music and pop up piano layouts, depending on how advanced the player is.

“The idea is, if you gave this to a two-year-old, they could put this together like LEGOs,”  Idan Beck, founder and CEO of Opho said in an interview with the Daily Dot.

He said when testing the product with a toddler, within minutes she’d figured out how to play a song correctly thanks to the LED lights. Children aren’t the only potential users of the $99 keyboard, however. Beck says that professional musicians and performers can connect it to their own systems and make music with the “Jedi keyboard,” too.

Keys can connect to any device like laptops or desktop computers that are MIDI compliant and can control software with gestures. For instance, you can program the device to change the distortion when swiped left or right, or record music from the keyboard. And since Keys is an open platform, developers can create their own software for it, too.

The device is made up of proprietary materials, meaning in addition to the software, its gesture technology and LED lights were built entirely by the small San Francisco-based team.

The device was inspired in part by Beck’s own history as a musician, both growing up and throughout college.

Keys is just the first piece of an entirely modular musical vision, Beck said, and he hopes that musicians will be able to purchase different parts to make a complete set, like synthesizers that connect to the piano.

“Our larger vision is to build an Internet for music,” Beck said.

The product launched today, and interested backers can pick up a Keys device via its crowdfunding campaign and save on the shipping. Beck said Keys are expected to start shipping in April.