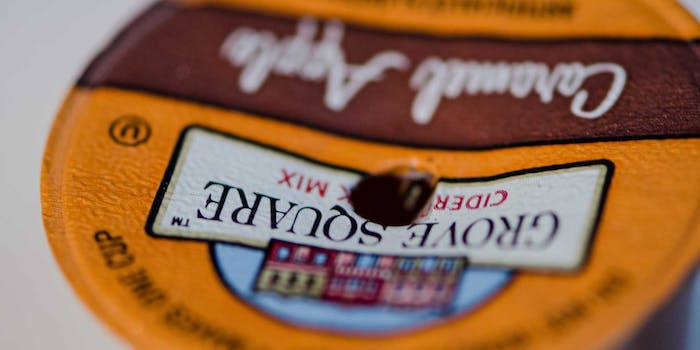 The creator of Keurig’s K-Cups regrets his invention

“I told them how to improve it, but they don't want to listen."

If you start your mornings out by throwing a pod into your Keurig brewer, then you can thank John Sylvan for inventing the K-Cup, but you probably shouldn’t.

According to a report from the Atlantic, Sylvan has some regrets about his involvement in the creation of the K-Cup.

Sylvan sold his share of the company in 1997 for $50,000, which is next to nothing considering Keurig Green Mountain’s $4.7 billion in revenue. But it’s not the money Sylvan is upset about. (Especially since he sold his Keurig stock—purchased at $3.20 a share in 2007—after it broke $140 a share.)

Instead, it’s the environmental impact of the little plastic pods that bothers Sylvan the most. Keurig has long come under fire for its coffee-delivery system, which produces a considerable amount of waste that is next to impossible to recycle. Though the company has committed to making its pods more eco-friendly by 2020, many of the over 9 billion K-Cups sold last year were not recyclable or biodegradable.

Sylvan isn’t so sure that Keurig will ever produce a product that isn’t immensely wasteful. “No matter what they say about recycling, those things will never be recyclable,” Sylvan said. “The plastic is a specialized plastic made of four different layers.”

It doesn’t help that Keurig’s most recent machine blocks third-party pods from working. Consumers have found ways around it and Rogers Family Company, a coffee maker that has created entirely recyclable coffee pods, produced its own workaround that it gives away for free to anyone who wants it.

Sylvan himself said he made suggestions to the company he once owned on how to improve the cup. “I told them how to improve it, but they don’t want to listen. There’s a much better way of doing it,” he told the Atlantic.

To clear his conscious of the environmental problem that he feels at least partly responsible for, Sylvan recently started a new company that sells cost-efficient solar panels.

As Keurig machines continue to populate more households every year (it’s already in one in three homes), Sylvan says that he won’t be buying one anytime soon. “I don’t have one. They’re kind of expensive to use,” he said. “Plus it’s not like drip coffee is tough to make.”