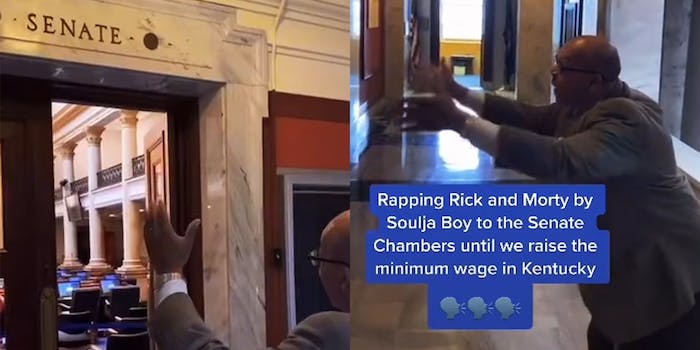 'Finally, a politician that can meme.'

The Kentucky Senate Democrats have gone viral after uploading a video to TikTok on Tuesday of a politician singing Soulja Boy’s “Rick & Morty.”

The footage, which has been viewed over 720,000 times on TikTok, shows Sen. Reginald Thomas (D) singing the popular song outside of the Senate Chambers in an effort to raise the state’s minimum wage.

“Rapping Rick and Morty by Soulja Boy to the Senate Chambers until we raise the minimum wage in Kentucky,” text on the video states.

The footage plays on a popular meme that has exploded on the internet in which users sing the song at interesting locations or in front of inanimate objects.

The video was met with mostly positive comments in which users applauded the account’s ability to meme.

“Finally, a politician that can meme,” the user anticapitalistpenguin wrote.

Others who claimed to be from Kentucky said the video made them proud of their state.

“[T]his account is why I’m glad to live in Kentucky,” a user named Rusty added.

The senator’s rendition of Rick and Morty also made its way to Twitter where users likewise celebrated the video.

But given the nature of the internet, not everyone was pleased. Some suggested that the 9-second video was somehow a waste of taxpayer money while others argued it was just a waste of time.

The video isn’t the first time the Kentucky Senate Democrats have gone viral on TikTok. Other videos on the channel that use popular memes have racked up close to 1 million views.