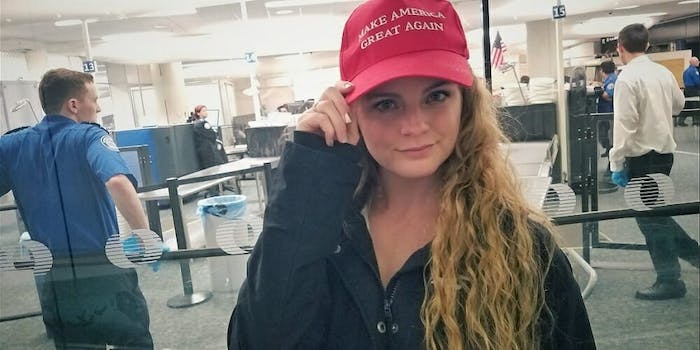 She said TSA 'jobs are disposable' after going through airport security.

The conservative pundit Kaitlin Bennett, better known as the Kent State Gun Girl for posing with an AR-10 at a campus infamous for the shooting deaths of four students, just disparaged the Transportation Security Administration on the heels of the country’s longest government shutdown—during which many TSA agents worked without pay.

After wearing President Donald Trump’s signature “Make America Great Again” hat through airport security, Bennett stopped to snap a photo. “Went through TSA with my #MAGA hat on to remind everyone that their jobs are disposable and they’re non-essential. Their paychecks come from someone else’s paychecks. What a world we live in where we accept that,” she wrote in a caption on Twitter Thursday, including hashtags like #AbolishTheTSA and #TaxationIsTheft.

Went through TSA with my #MAGA hat on to remind everyone that their jobs are disposable and they're non-essential. Their paychecks come from someone else's paychecks. What a world we live in where we accept that. #AbolishTheTSA #TaxationIsTheft pic.twitter.com/E76VjJfUH2

The post was ratioed faster than you can say “white privilege.” Twitter users were quick to defend both the TSA’s functions and its workers who went without paychecks for weeks on end. Others also noted the hypocrisy of a self-identifying conservative calling to abolish taxes while simultaneously championing for government funds to construct a border wall.

#TaxationIsTheft? So how are you planning on paying for national defense?

You *do* realize the entire reason they worked without pay during the shutdown is that they’re deemed “essential” to national security, right?

Your taxpayer-funded education did you no favors.

I’m certain they pay more taxes than you, bitch

Bennett, who recently hosted an InfoWars-themed sleepover in a bizarrely unfurnished apartment, balked at the many users calling the TSA’s defense of national security essential. “Remember that time they caught a terrorist and did something useful? Me neither,” she tweeted Thursday evening.

To put it lightly, Twitter disagreed. The dunking commenced.

Remember that time that you did something useful? No one does

Hours later, Bennett posted again, clearly unfazed by the onslaught of comments. She wrote she would “never apologize for speaking the truth” or cave to the “leftist mob.”