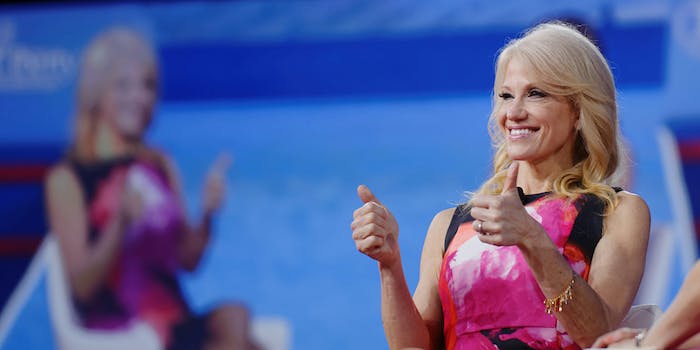 Conway said the White House wants 'the votes' to push through the GOP tax plan.

Speaking with Fox & Friends last week, Conway began by saying that “there is no Senate seat worth more than a child,” alluding to Moore’s alleged attempted rape of a 16-year-old and sexual assault of a 14-year-old when he was in his 30s.

However, when questioned on Monday about whether people should vote for Moore or his Democratic opponent Doug Jones, she changed her tune a bit.

“I’m telling you that we want the votes in the Senate to get this tax bill through,” Conway said.

Conway then tried to bash the media, Democrats, and others for coverage of Moore and Sen. Al Franken (D-Minn.), who has been accused of sexual misconduct by several women, before turning her attention to Jones.

“The guy Doug Jones is a doctrinaire liberal,” she said. “I just want everybody to know Doug Jones. Nobody ever says his name, and they pretend that he’s some kind of conservative Democrat in Alabama, and he’s not.”

Conway said there is “no plan” for Trump to travel to Alabama and stump for Moore.

The Republican National Committee has withdrawn its support for Moore, and several prominent Republicans—including Senate Majority Leader Mitch McConnell—have said Moore should drop out of the Alabama Senate race.