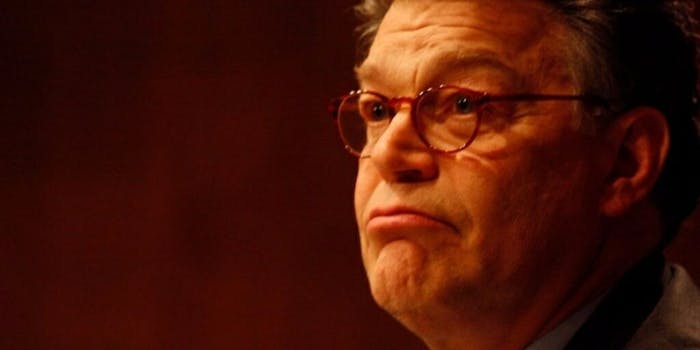 A second woman says Al Franken groped her—this time, when he was a senator

She said Franken ‘wrapped [his hand] tightly around my butt cheek.’

A second woman says Minnesota Sen. Al Franken (D) inappropriately touched her in 2010—when Franken was already a U.S. senator.

Lindsay Menz, a 33-year-old woman who now lives in Texas, told CNN that Franken grabbed her buttocks when the two posed for a photo at the Minnesota State Fair in 2010.

As Menz’s husband, Jeremy, was set to snap a picture of Franken and Lindsay, she said Franken “pulled me in really close, like awkward close, and as my husband took the picture, he put his hand full-fledged on my rear. It was wrapped tightly around my butt cheek.”

She said Franken’s hand rested on her rear for three or four seconds.

“He reached around her and kind of pulled her into him,” Jeremy Menz told CNN. “He pulled her in and pushed his head against her head. It was over pretty quick.”

Jeremy Menz didn’t see what had happened, but after Franken left, Lindsay told him, “He totally grabbed my butt.” Menz’s parents told CNN that she told them about Franken’s actions immediately afterward.

In a statement to CNN, Franken said, “I take thousands of photos at the State Fair surrounded by hundreds of people, and I certainly don’t remember taking this picture. I feel badly that Ms. Menz came away from our interaction feeling disrespected.”

Last week, Los Angeles news anchor Leeann Tweeden said in a blog post that Franken forcibly kissed her and released a photo showing Franken groping her breasts while she was sleeping.

Franken apologized to Tweeden and said he would cooperate with a Senate ethics investigation into his conduct.

“I respect women,” Franken said in a statement last week. “I don’t respect men who don’t. And the fact that my own actions have given people a good reason to doubt that makes me feel ashamed.”

Menz said she reached out to CNN after Tweeden told her story. She also tweeted about the incident.

In August 2010, @alfranken grabbed me while taking a photo together at the Minnesota State Fair. I felt violated & embarassed. I 100% believe your account of him & his actions. Thank you for sharing your story. #metoo @LeeannTweeden

.@Liz_Wheeler in 2010 @alfranken grabbed me while taking a photo together at the Minnesota State Fair. There have to be many others… don't let this story fade.

“I felt gross. It’d be like being walking through the mall and some random person grabbing your butt,” Lindsay Menz told CNN. “You just feel gross. Like ew, I want to wash that off of me.”

Some political pundits predicted Monday morning that Menz’s story would spell the end of Franken’s political career. On Saturday, before Menz’s story was revealed, a spokesperson said Franken would not resign, telling the Minneapolis Star Tribune, “He is spending time with his family in Washington, D.C., and will be through the Thanksgiving holiday, and he’s doing a lot of reflecting.”