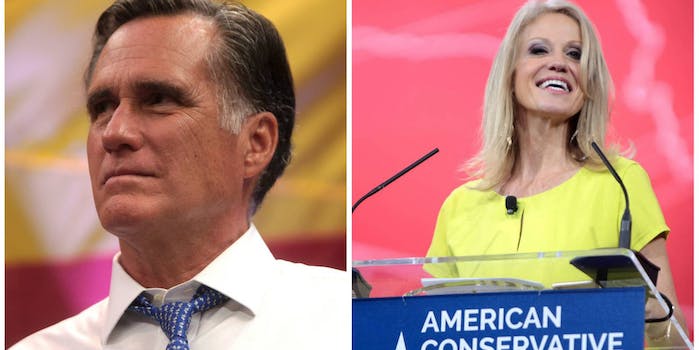 While President-elect Donald Trump is trying to decide who he should nominate to be the secretary of state in his new administration, his senior adviser is using Twitter and the national TV airwaves to try to convince her boss not to select one of Trump’s biggest Republican rivals.

Kellyanne Conway has been adamant lately that Trump not select Mitt Romney, the 2012 Republican presidential candidate who has been a harsh critic of Trump. Though Romney called Trump a “phony” and a “fraud” in March, he, along with Rudy Guiliani, apparently is in the running to fill one of Trump’s most important Cabinet positions.

Rumors emerged this week that Romney would have to apologize publicly to Trump in order to be in contention for the job, but so far, that hasn’t happened. And Conway clearly would prefer someone else, using the power of social media and the power of the Sunday broadcast TV shows to give her opinions.

Receiving deluge of social media & private comms re: Romney Some Trump loyalists warn against Romney as sec of state https://t.co/HDtpjeJTc3

As she said on ABC’s This Week, this is the party of Trump, not of Romney and his supporters.

“I think that there was the ‘Never Trump’ movement and then there was Gov. Mitt Romney,” she said. “He went out of his way to hurt Donald Trump. He gave two speeches that I can recall in this calendar year, and they were both about Donald Trump.”

She also said she doesn’t think Trump needs to choose Romney in order to satisfy a certain wing of the Republican Party.

.@KellyannePolls on Mitt Romney: "I don't think a cost of admission for party unity has to be the secretary of state position." #ThisWeek pic.twitter.com/n923dwgT9y

That wasn’t all she said about Romney, though. On CNN’s State of the Union, via Politico, Conway said, “You know, Gov. Romney ran for the same office four years ago and lost spectacularly. Mitt Romney lost Michigan by 10 points; Donald Trump just won it.

“Gov. Romney, in the last four years, has he been around the globe doing something on behalf of the United States of which we’re unaware? Did he go and intervene in Syria, where they’re having a massive humanitarian crisis? Has he been helpful to [Israeli Prime Minister Benjamin] Netanyahu?”

On NBC’s Meet the Press, she continued the attack: “People feel betrayed to think that Gov. Romney, who went out of his way to question the character and the intellect and the integrity of Donald Trump, now our president-elect, would be given the most significant Cabinet post of all, secretary of state. They feel a bit betrayed that you can get a Romney back in there after everything he did.”

Hmm, perhaps Conway would be better off keeping these conversations private instead of spraying it into the public conversation.

I did tell him privately. And I'll respect his decision. Point is the volume & intensity of grassroots resistance to Romney is breathtaking https://t.co/bknmfGZ13a

Either way, perhaps a decision is coming soon. After all, Trump reportedly spent part of his Thanksgiving holiday asking his guests who he should choose.