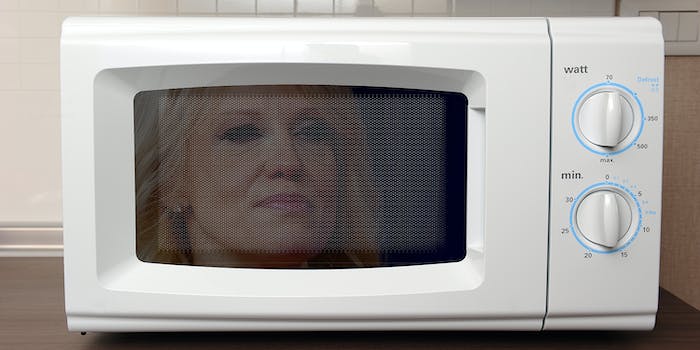 The internet had a field day with this one.

President Donald Trump’s senior adviser Kellyanne Conway admitted on Monday morning that she didn’t have “any evidence” that the Obama administration had wiretapped the Trump campaign, despite an interview on Sunday in which she suggested that the previous administration could have spied on Trump through his microwave.

“What I can say is there are many ways to surveil each other,” Conway said to the Bergen Record on Sunday, unable to provide evidence that backed up the President’s wiretap allegations, but opening up on the many hypothetical ways in which one could have listened in on the campaign.

“You can surveil someone through their phones, certainly through their television sets – any number of ways,” she continued before suggesting that there are even household appliances like “microwaves that turn into cameras. We know this is a fact of modern life.”

Q: Do you know if Trump Tower was wiretapped?

Kellyanne: There was an article this week—you can be spied on via a camera in your microwave pic.twitter.com/rObFkIrLGG

Conway seemed to have been referencing Wikileaks’ recent press release, accompanying an enormous CIA file dump last week, in which it stated on the basis of the leaked information that the intelligence agencies could exploit consumer technologies such as smart TVs to spy on the public.

Of course, the internet reacted in its own way.

After the pushback Conway appeared on Monday morning to explain to George Stephanopoulos that her comments were separate from Trump’s original claim: “Of course I don’t have any evidence for those allegations and that answer had nothing to do with what the president said last week.”

.@KellyannePolls says she was "talking about surveillance generally," says she was misquoted https://t.co/JkaWQmIUuw

Trump had first tweeted the baseless claims that Obama had ordered him to be wiretapped over one week ago, which the former president has since denied.

The White House, despite growing pressure, has been unwilling or unable to substantiate the allegation. FBI director James Comey has reportedly asked the Department of Justice to challenge and reject Trump’s claim.

Trump’s administration has since called on Congress to investigate the claim, but Sen. John McCain (R-Ax.) has asked Trump to provide evidence or retract his allegation altogether.

“President Trump has to provide the American people, not just the intelligence committee, but the American people with evidence that his predecessor … was guilty of breaking the law, because our [former] director of national intelligence, General [James] Clapper, testified that there was absolutely no truth to that allegation,” McCain told CNN’s State of the Union.