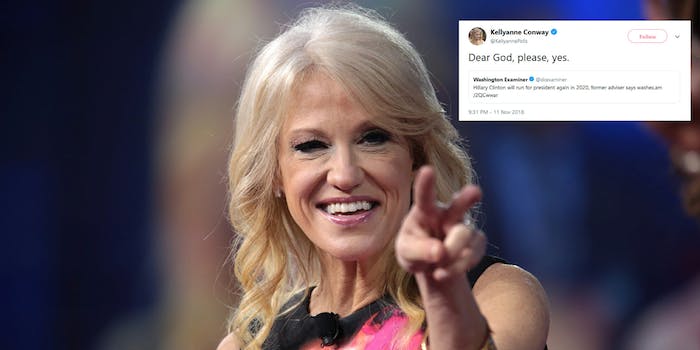 Conway made her excitement known in response to an op-ed published in the Wall Street Journal that outlined how Clinton—who has twice made attempts to win the White House—could make yet another run in 2020 in a hypothetical rematch against Trump.

The op-ed, written by a former adviser to Clinton, predicted that Clinton would run again in the 2020 election, joining what is expected to be a long list of Democrats who will try to square off against Trump.

“You can expect her to run for president once again,” the op-ed, published on Sunday, reads. “Maybe not at first, when the legions of Senate Democrats make their announcements, but definitely by the time the primaries are in full swing.”

The idea of Trump facing off against Clinton seemed to be music to Conway’s ears.

Conway’s sentiments are similar to the president’s, who wrote that he hopes Clinton runs again in an October 2017 tweet.

“I was recently asked if Crooked Hillary Clinton is going to run in 2020? My answer was, ‘I hope so!'” he wrote at the time.

It’s worth noting that Clinton has said she won’t run for president again, despite several people speculating she might.

The essay posits that Clinton, who pushed for healthcare reform in 1994, could reembrace her liberal roots by running a more left-leaning campaign that progressives would be more likely to support.