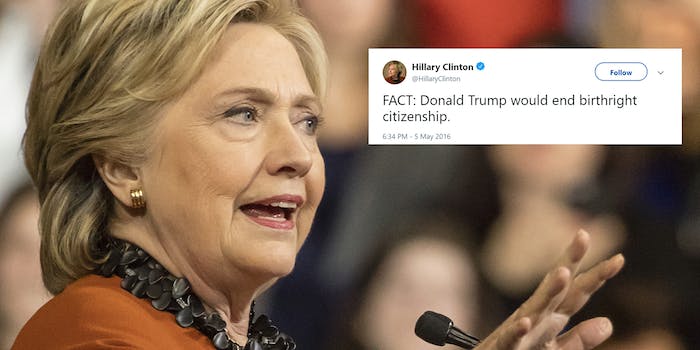 We should have listened.

Following a report that Trump may try to end birthright citizenship, the internet has dug up an old tweet from his presidential rival Hillary Clinton that is extremely relevant to the situation.

On Tuesday, Axios released an excerpt, in conjunction with its new HBO show, that revealed that Trump is considering ways to end citizenship to children born on U.S. soil. “It was always told to me that you needed a constitutional amendment. Guess what? You don’t,” Trump said in the interview clip shared by Axios. Trump then claimed he could do it with an executive order. In other words, he believes that he has the power to change the Constitution.

Experts heartily disagree with Trump’s claim, however. In an op-ed for the Washington Post, former U.S. Solicitor General George T. Conway III wrote that “no matter what, an executive order could never suffice” to amend the Constitution. He also pointed out that Article I of the Constitution explicitly gives Congress power over immigration, and the president has none, “except as Congress has given to him by statute.”

Constitutional experts may say Trump is wrong in his ideas about how he will end birthright citizenship, but that doesn’t mean he’ll stop trying; his rhetoric has only incited further confusion and animosity against immigrants. As people on the internet discussed the ins and outs and what we can do to fight back, a tweet from over two years ago came back into relevance.

“FACT: Donald Trump would end birthright citizenship,” wrote Clinton on May 5, 2016. She also shared a Business Insider article that explained how Trump and other GOP candidates had expressed support for altering the constitutional amendment that guarantees citizenship to all people born on U.S. soil.

Since the tweet’s unearthing, people are once again remarking on how Clinton tried so hard to warn the country of the mess they were getting into, and the relevance of her predictions. In general, one did not have to look very hard to see Trump’s dog-whistling to white supremacists and their ideals.

Welp…and here we are. Congrats, Everybody.

Clinton may not say “I told you so,” but it looks like she’d be pretty justified if she wanted to do it.