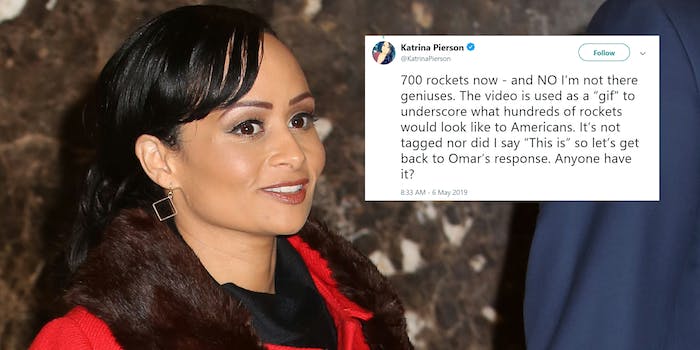 She can't really be that ignorant, can she?

Katrina Pierson is the gaffe gift that keeps on giving.

In a single tweet, President Donald Trump’s 2020 adviser and 2016 national presidential campaign spokesperson managed to both try to pass off a video from a 2014 video in Belarus as taking place in Israel over the weekend, and then to call out the wrong congressperson.

Pierson directed her tweet at Rep. Ilhan Omar (D-Minn.), the first Somali-American elected to Congress, instead of Rep. Rashida Tlaib (D-Mich.), who, as the first Palestinian-American congressperson, is probably better positioned to comment on violence between Israel and Palestine.

650 Rockets being fired into Israel from Gaza in an attempt to overwhelm Israels Iron Dome: 173 intercepts, 4 people killed, and 28 wounded. What is @IlhanMN response to this violence? Will she condemn it? pic.twitter.com/Vb1Ymxygj6

Pierson has never been one to let facts get in her way when she has a job to do. Because how else can she sow animosity for Rep. Omar, Republicans’ second-favorite villain? (Rep. Alexandria Ocasio-Cortez (D-N.Y.) clearly being the first.)

Twitter users were more than happy to point out her error regarding which war and when.

After numerous people pointed out that the video she posted was actually four-year-old footage from a battle that took place more than 1,000 miles away, she amusingly claimed that she was merely using it as a “gif.”

Given Pierson’s history of verbal contortions in defense of Trump, it’s not particularly surprising that she’d get the where, when, and who wrong in a single statement.

Consider the time she attempted to clap back on Al Sharpton’s question about the lack of diversity in Trump’s West Wing by asking how many Black people held such positions in Lincoln’s administration, her stylin’ and profilin’ in a bullet necklace during an appearance on CNN, when she carried water for the racist birther movements about President Obama and Sen. Marco Rubio (R-Fla.), or when she referred to slavery in America as “good history.”

Even better, Rep. Tlaib had already weighed in on the outbreak of violence in her homeland, tweeting disparagingly of coverage by the New York Times which framed the violence as having been solely instigated by the Palestinians.

For what little it’s worth, Rep. Omar also addresses the battle between Israel and Palestine over the weekend, tweeting, “How many more protesters must be shot, rockets must be fired, and little kids must be killed until the endless cycle of violence ends? The status quo of occupation and humanitarian crisis in Gaza is unsustainable. Only real justice can bring about security and lasting peace.”

True to form, Pierson remains blithely (and probably intentionally) ignorant of the fact that the information which she ostensibly seeks—Omar’s response—already exists.

So it’s probably not worth pointing out that the 2,000 miles that separate Somalia and Israel is approximately the same distance between her tweet and the truth.

Correction: The video Katrina Pierson shared is from Belarus in 2014, not Ukraine.

Took a bit, but finally figured out where the @KatrinaPierson Grad video was filmed — not Gaza (obviously), or Ukraine, or Russia, but Belarus. This March 2014 video shows it from a slightly different perspective at the Polessky firing range.https://t.co/uOtX1R1AEx pic.twitter.com/xSypyg5cUd