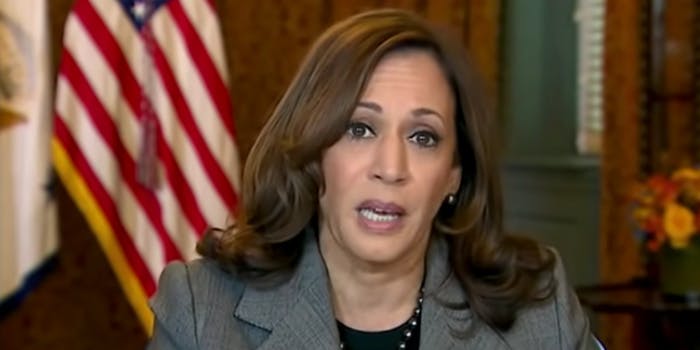 'Y’all voted for a man who lived in an apartment made of gold but go on.'

An “exclusive” news article from a conservative media outlet is being widely mocked for portraying the purchase of cookware by Vice President Kamala Harris as a scandalous discovery.

In a tweet on Tuesday, the Washington Free Beacon reported that Harris had spent roughly $600 during a so-called “spending spree” in Paris, France.

Harris’ purchase was suggested to be insensitive given that many “U.S. families are struggling to pay for Thanksgiving dinner.”

The vice president was reported to have made the purchases at E. Dehillerin, a cookware store near the iconic Louvre museum. Items allegedly included a $375 serving dish as well as a $160 frying pan.

“The money Harris dropped at E. Dehillerin could have been used to buy at least 25 16-pound turkeys for families in need, according to a Free Beacon cost analysis,” the outlet wrote.

Yet the Free Beacon’s reporting wasn’t well received, with dozens of users on Twitter mocking the outlet’s editorial decision.

The term “Le Creuset,” which refers to a popular cookware producer known for its high-quality products, even began a trending topic on Twitter as a result.

“I just want to say that I own three pieces of Le Creuset; each was an investment of several hundred dollars,” @historianess wrote. “I use them daily and sometimes twice a day bc I enjoy cooking. Fuck off with your ‘critiques’ of Kamala Harris.”

Many other people online had similar sentiments.

Users replying to the Free Beacon’s tweet made similar remarks, noting that many people serious about the culinary field have invested in high-end cookware.

“Here’s a little wake-up call for you: Every cooking show, every tv kitchen, every foodie blog with photos…. They all have big Le Creuset pots–which cost… wait for it…$300 apiece,” @Lee-in_Iowa wrote. “I’m a teacher and I have three. So. This ‘story’ is silly.”

Given the current political divide, many also made comparisons to the wealth of former President Donald Trump.

“Maga are melting down because the VP Bought a Le Creuset pot? Ummm, do they not recall what their leader the orange garbage pile lives in? Give me a f’ing break. Hypocrites,” @dddonnnaaa said alongside a picture of Trump’s gold-adorned New York City home.

Some conservative users, however, did appear to side with the Free Beacon’s reporting. One user even argued that Harris should be “impeached” for the shopping trip.

The story was even shared on Twitter by Fox News and conservative commentator Glenn Beck. Both tweets were quickly ratioed.