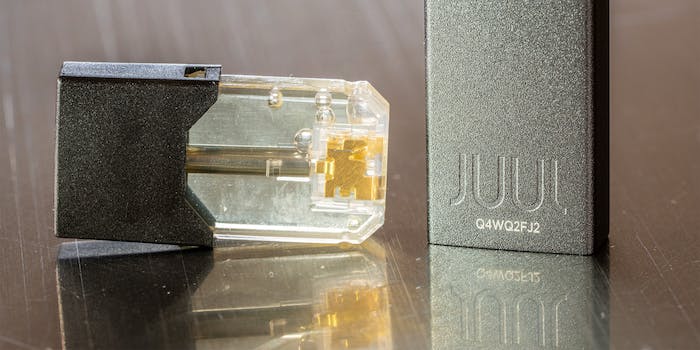 The move comes amid a possible nationwide ban.

New York Attorney General Letitia James announced the lawsuit on Tuesday. It was filed in New York County Supreme Court. The move comes as e-cigarettes have been the target of bans at the state level—and the subject of a possible flavor ban by the Trump administration.

The suit alleges that JUUL “took a page from Big Tobacco’s playbook” and used “bright and colorful images of attractive young people” in ad campaigns that also failed to warn consumers that the products contained nicotine.

BREAKING: I filed a lawsuit against @JUULvapor.

JUUL has allegedly engaged in deceptive marketing practices targeting minors and misled consumers about both the nicotine content and safety of its products.

They've put countless New Yorkers at risk & we won't stand for it. pic.twitter.com/szuU0M5e0n

“There can be no doubt that JUUL’s aggressive advertising has significantly contributed to the public health crisis that has left youth in New York and across the country addicted to its products,” James said in a statement. “By glamorizing vaping, while at the same time downplaying the nicotine found in vaping products, JUUL is putting countless New Yorkers at risk. I am prepared to use every legal tool in our arsenal to protect the health and safety of our youth.”

A spokesperson for JUUL told Fox Business that the company remains “focused on resetting the vapor category in the U.S. and earning the trust of society,” but had not seen the New York lawsuit yet.

Last month, New York City announced that it had filed a lawsuit against more than 20 online e-cigarette retailers, alleging that they did not use age verification technology when selling their products online.

Other states, such as California, have also sued JUUL.

Following the Trump administration’s announcement that it was working on a flavor ban, JUUL said it would stop advertising in the United States.