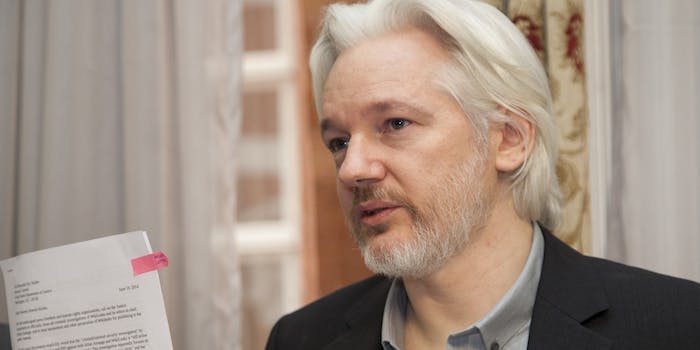 What will happen next for the WikiLeaks founder?

Julian Assange is reportedly about to be kicked out of the embassy he’s called home for the past six years. Four months after the Ecuadorian government cut the internet to Assange’s refuge, the WikiLeaks founder is on the verge of finding himself homeless.

Assange has taken refuge for the past six years at Ecuador’s embassy in London, but according to the Times of London, his time at his safe haven could be over in “hours, days or weeks” after Ecuador’s President Lenin Moreno said it was time for him to leave.

The 47-year-old Assange took up residence at the embassy in 2012 after Swedish prosecutors wanted to question him during an investigation into rape allegations. As Business Insider notes, he’s no longer wanted in Sweden, but Assange is still wanted by U.K. police for breaching his bail agreement before he sought political asylum.

As long as he remains in the Ecuadorian embassy, he can’t be extradited to the U.S. or Sweden, and he can’t be arrested. But making matters worse for Assange, his health reportedly isn’t good.

According to Business Insider, “Both Ecuador and Britain want to ensure Assange remains unharmed. But their suspicion is that U.S. prosecutors have a sealed indictment against him and will extradite him to America, where he faces prison if convicted of charges related to the publication of U.S. documents that were subject to national security secrecy protections.”

Independent counsel Robert Mueller certainly could want him for questioning regarding WikiLeaks’ role in Russia’s hacking of the 2016 U.S. election.

President Donald Trump has proclaimed that he loves WikiLeaks. But when Mike Pompeo, the secretary of state, was the CIA director, he said, “We can no longer allow Assange and his colleagues the latitude to use free speech values against us.” Pompeo also has called Assange a “fraud” and a “coward.”