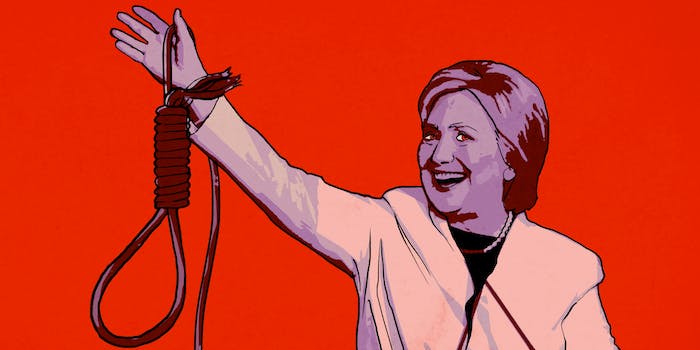 Julian Assange: U.S. media will ‘put nooses around everyone’s necks’ by being soft on Clinton

If you still weren’t sure what WikiLeaks founder Julian Assange thinks of Democratic nominee Hillary Clinton, wonder no more.

“The American liberal press, in falling over themselves to defend Hillary Clinton, are erecting a demon that is going to put nooses around everyone’s necks as soon as she wins the election, which is almost certainly what she’s going to do,” Assange said during a Facebook Live interview with the New York Times on Wednesday.

Assange made the comment as a warning against a “neo-McCarthyist hysteria” created by Clinton and the Democratic establishment, whom he says have painted Republican nominee Donald Trump and others, including Green Party nominee Jill Stein, as agents of Russia. By not pushing back against these claims, Assange said, American journalists allow the creation of an environment unsuitable for free speech.

Although it’s true that bias exists in reporting across the media landscape, few publishers have successfully influenced the 2016 election more than Assange’s WikiLeaks.

Emails contained within the document dump showed coordination between the DNC and the Clinton campaign that show how challenger Sen. Bernie Sanders (I-Vt.) may have been put at a disadvantage by the DNC. This revelation and others forced Rep. Debbie Wasserman Schultz of Florida to resign as chair of the DNC just as the party’s convention kicked off, throwing the Democrats’ biggest event of the election into a chaotic tailspin. Other DNC staffers soon followed Wasserman Schultz out the door.

The source of the leaked DNC documents remains unconfirmed and will likely stay that way, but all signs point to the Russian government—a fact Assange has dismissed when questioned over his source while simultaneously fueling a conspiracy theory that Clinton had a DNC staffer murdered.

Regardless of who leaked the documents to WikiLeaks, Assange promises there are “thousands” of pages of addition documents yet to come.

Clarification: Assange’s comment about American media “erecting a demon” referred to what he believes are Clinton’s “neo-McCarthyist” tendencies to demonize the publication of details the former secretary of state wants to be kept secret. We have updated the headline to deemphasize Assange’s likening of Clinton herself to a demon for better clarity.