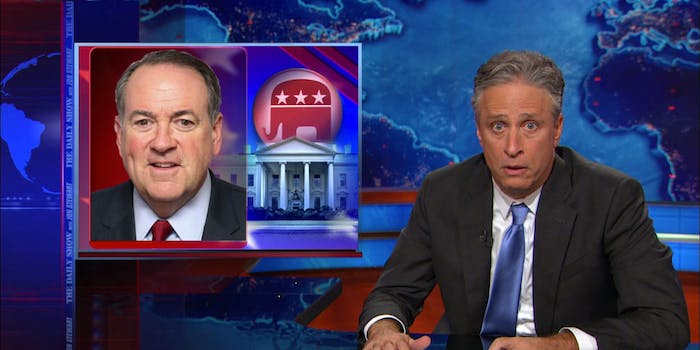 Jon Stewart always has some witty comment up his sleeve about the 2016 presidential candidates and the darndest things they say on the campaign trail. But one of them finally made the normally unflappable Daily Show host lose his marbles.

Former Arkansas governor and Republican presidential candidate Mike Huckabee invoked the Holocaust once again when he said that, through the Iran nuclear deal, President Barack Obama “will take the Israelis and march them to the door of the oven.”

Even as his opponents condemned his comments, Huckabee doubled down.

You did it, Huckabee. With three weeks to go, you finally broke Jon Stewart.

While Stewart and others initially thought that Huckabee’s rash comments might have been part of the Trump effect—saying absolutely terrible things and doubling down to get attention—the footage showed that Huckabee has been doing this for a long time.