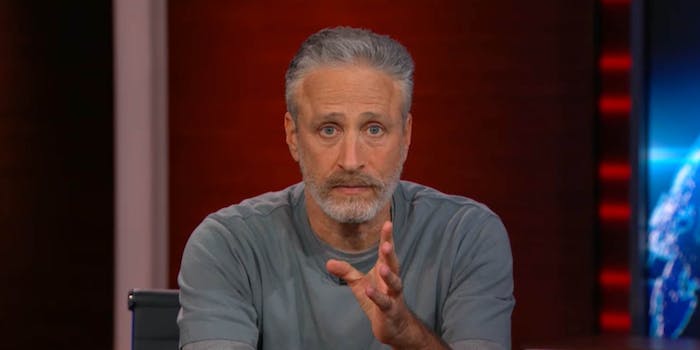 This has always been a deeply personal issue for Stewart.

Four months after leaving The Daily Show, Jon Stewart returned for a subject near and dear to his heart.

Stewart talked to host Trevor Noah about health care for the first responders of the Sept. 11, 2001 terrorist attacks, a cause that he’s been championing for years. Specifically, he was promoting a renewal of the Zadroga Act, a 2010 law that gave healthcare to 9/11 responders. Portions of the act have already expired, and if Congress doesn’t renew it soon, first responders will soon be left without access to badly needed medical care.

Stewart stepped in as a temporary Daily Show correspondent, hosting a segment in which he visited Congress to shame politicians into renewing the law. Most of them were unavailable to comment on camera—including Stewart’s longtime nemesis, Senate Majority Leader Mitch McConnell (R-Ky.).

In a second segment, Stewart recreated the panel of 9/11 first responders that he invited to the show five and a half years ago, before the Zadroga Act was signed. It was a powerful moment, as the camera panned around to reveal only one man sitting at the desk. Out of the other three first responders on that original panel, one had passed away and the other two were too sick to make it to the show.

“The only conclusion that I can draw,” said Stewart, on the topic of the Zadroga Act, “is that the people of Congress are not as good a people as the people who are first responders.”