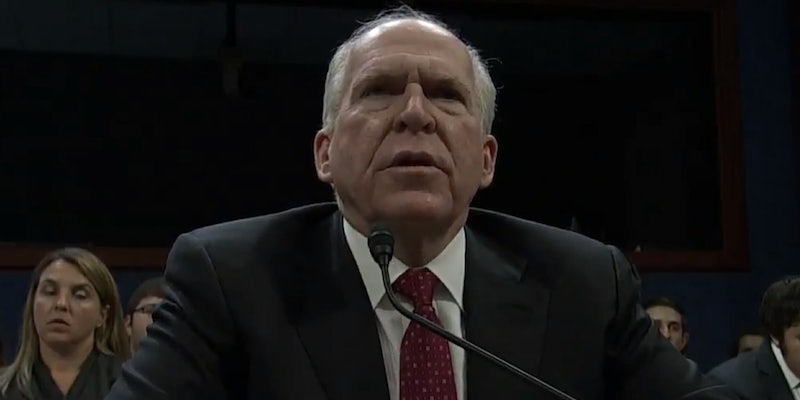 Former CIA Director John Brennan told lawmakers on Tuesday that he was “concerned” about intelligence that showed “contacts and interactions” between Russian officials and people involved with President Donald Trump’s campaign.

Speaking before the House Intelligence Committee, Brennan said he was concerned that members of Trump’s campaign acted wittingly—or unwittingly—on behalf of Russia. He did not name any people specifically.

“I don’t know whether or not such collusion—and that’s your term—such collusion existed, I don’t know,” he said. “But I know there was a sufficient basis of information and intelligence that required further investigation by the bureau to determine whether or not U.S. persons were conspiring, colluding, with Russia officials.”

When asked directly by Rep. Trey Gowdy (R–S.C.) if he saw “evidence of collusion” between Trump and Russian officials, Brennan repeated that he saw evidence that was worth investigating.

“I saw information and intelligence that was worthy of investigation by the bureau to determine whether or not such cooperation or collusion was taking place,” Brennan said.

“That doesn’t help us a lot,” Gowdy said. “What was the nature of the information?”

“As I said, Mr. Gowdy, I think this committee now has access to the type of information I’m alluding to here. It’s classified, and I’m happy to talk about it in classified session,” Brennan responded.

Brennan also said he was worried by “a number” of contacts between Russia and people in the United States.

“By the time I left office on January 20, I had unresolved questions in my mind as to whether or not the Russians had been successful in getting U.S. persons involved in the campaign, or not, to work on their behalf—again, either in a witting or unwitting fashion,” Brennan said. “So, therefore, I felt as though the FBI investigation was certainly well founded and needed to look into those issues.”