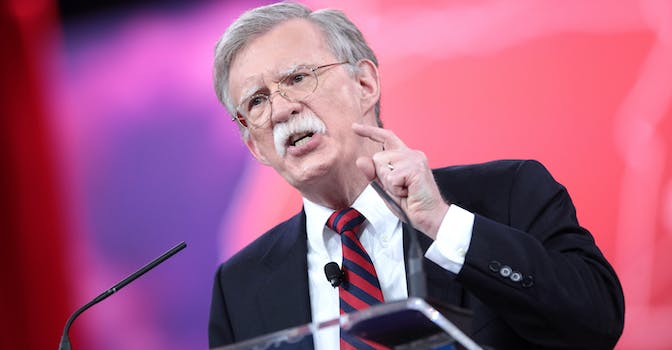 John Bolton, the man who is slated to be Trump’s third national security adviser in roughly a year, doesn’t exactly have big shoes to fill.

Bolton’s thirty-year career in foreign policy has spanned three Republican presidents and stints in the State Department, USAID, and the United Nations. He will be replacing H.R. McMaster, a straight-as-an-arrow army general who Trump grew to despise due to his moderate views on North Korea, Iran, and other divisive issues in American foreign policy. Trump’s first national security advisor, Gen. Michael Flynn, lasted less than a month in the job and was indicted last year for lying to the FBI.

Despite the failings of his predecessors, Trump’s pick of Bolton—a neoconservative war hawk with a hardline stance on North Korea and Iran—is already riling up controversy in Congress and around the world. He didn’t last a day without causing drama: Bolton’s firm once hired Cambridge Analytica, the data company mired in the middle of a scandal over stealing Facebook user information, the New York Times reported on Friday.

And it gets worse.

The Iranian government called Bolton, who vehemently opposes the Obama administration’s Iran nuclear deal, a “supporter of terrorists.” South Korea fears that Bolton’s support of preemptive strikes against North Korea will complicate matters ahead of planned summits with Kim Jong Un in April and May. North Korea once called Bolton “human scum” and a “bloodsucker” when he was undersecretary for arms control in the Bush State Department.

Unlike Flynn and McMaster, Bolton has no military experience. His background is chiefly in diplomacy. But don’t let that fool you. Despite serving a short stint as U.S. ambassador to the United Nations and several years in the State Department, Bolton is more sticks than carrots. Bolton’s hawkish views on everything from the Iran Deal to the use of U.S. military force will likely put him in perfect lockstep with the Trump White House.

Here are several other things you may not have known about Bolton:

Bolton was described as an “800-pound gorilla devouring a banana”

Despite the approval of then-President George W. Bush and Vice-President Dick Cheney to become U.S ambassador, Bolton faced a series of disastrous confirmation hearings that made his approval by the U.S. Senate very unlikely. A former State Department official accused Bolton of being a “serial abuser“ of lower-level officials that disagreed with his hardline views while serving as undersecretary of arms control in the State Department. Carl Ford Jr., a Republican who served as undersecretary for intelligence at State described the abuse Bolton directed at an analyst who disagreed with him over Cuba.

“There are a lot of screamers that work in government,” Ford said to the New York Times in 2005. “But you don’t pull somebody so low down the bureaucracy that they are completely defenseless. It’s an 800-pound gorilla devouring a banana.”

The abuse was so bad that the Secretary of State had to intervene. Democrats in the Senate Foreign Relations Committee were, to say the very least, unimpressed with Bolton’s treatment of his subordinates while at State.

Sen. Christopher Dodd (D-Conn.) even told the media during the confirmation hearings that a “whole slew” of government officials could have supported Ford’s testimony.

Bolton was eventually made U.N. ambassador by recess appointment by Bush in 2005, thanks to a Democrat filibuster. His nomination still had to be confirmed by the Senate in order to become permanent. After Senate Democrats continuously blocked his confirmation from heading to the floor, Bolton resigned as U.N. ambassador in December 2006.

Pyongyang is no fan of Bolton. Bolton traveled to South Korea while serving as State Department undersecretary in advance of six-way talks on the future of North Korea in 2003. Bolton called Kim Jong II, who then served as North Korea’s leader, a “tyrannical dictator” and said that life for many North Koreans was a “hellish nightmar.”

North Korea subsequently banned Bolton from visiting the nation in a letter published in the state media. It also referred to Bolton as “human scum” and a “bloodsucker.”

“We have decided not to consider (…Bolton) as an official of the U.S. administration any longer nor to deal with him,” the unidentified spokesman said in a report on North Korea’s official news agency

Jose Bustani, who served as director general of the Organization for the Prohibition of Chemical Weapons in the Hague, wanted to send chemical weapons inspectors to Baghdad. But Bolton had other plans. Bustani reported receiving a menacing phone call from Bolton and then was told by the State Department undersecretary that he had “24 hours to resign.”

Bolton’s office had started a campaign to oust Bustani by circulating a letter of accusations and bringing in its allies. Bustani was unceremonially ousted in a 48-7 vote by the U.N. Chemical Weapons Convention, with 43 nations choosing to abstain.

Bustani maintained his belief that there were no chemical weapons in Iraq and accused the United States of organizing his departure in order to suit their agenda in the Middle East.

Bolton objected to Bustani’s argument over there being no chemical weapons in Iraq, calling the former head of the world’s lead chemical weapons agency the kind of person “who puts tin foil on his ears to ward off cosmic waves.”

Despite serving as USAID’s assistant administrator for policy and programs, Bolton criticized U.S. support for development programs. According to the Village Voice, Bolton alienated attendees at a 1982 conference of the International Fund for Agricultural Development after vowing to withdraw U.S. funding for its programs.

Bolton’s reign as U.N. ambassador is all the more ironic given that he regularly criticized the organization. Bolton even went so far as saying that the organization did not in fact exist.

“There is no such thing as the United Nations. There is only the international community, which can only be led by the only remaining superpower, which is the United States,” said Bolton in a 1994 speech he gave to the World Federalist Association.

Bolton’s characteristic facial hair may be holding him back in the workforce. Bolton was on the shortlist for Secretary of State in 2016 but was vetoed due to his mustache, aides told the Washington Post.

Donald was not going to like that mustache,” an anonymous Trump associate told the Post about Bolton’s facial hair. “I can’t think of anyone that’s really close to Donald that has a beard that he likes.”

Trump spent more time deriding Bolton’s mustache in the transition than focusing on why he didn’t want him as nsa. Kelly was said by multiple sources to have played role in souring Trump on Kelly – Kelly had a bigger problem with him than Trump did.

Trump still had remaining qualms over Bolton’s mustache before appointing him to be national security advisor but ended up demurring, according to a White House aide.