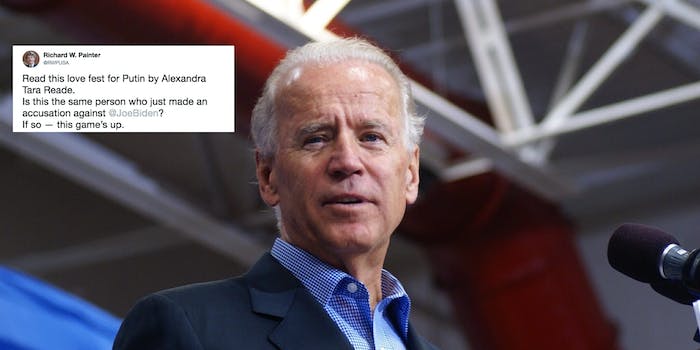 Alexandra Tara Reade came forward with allegations that Joe Biden inappropriately touched her on several occasions when she worked at his office in 1993.

Reade came forward on Wednesday with allegations that Biden had inappropriately touched her on several occasions in a way that made her feel uncomfortable when she was in her mid-20s and worked for his Senate office in 1993.

“He used to put his hand on my shoulder and run his finger up my neck,” she told the Sierra Sun. “I would just kind of freeze and wait for him to stop doing that.”

“My life was hell,” Reade continued. “This was about power and control.”

The Nevada County resident is just one of a number of women who have come forward publicly with similar allegations.

With Reade, however, attention quickly turned to some blogs she’d written in 2018 about Russia and Putin—one of which was also posted in Russian.

“I love Russia with all my heart,” Reade wrote in an article last December on Medium. “President Putin scares the power elite in America because he is a compassionate, caring, visionary leader.”

Atlantic writer Edward-Isaac Dovere brought the revelation to Twitter’s attention on Wednesday night in a thread.

"Instead of being ensnared in the recent political intrigues (and America is trying hard to set that trap)," she wrote, "To President Putin, I say keep your eyes to the beautiful future and maybe, just maybe America will come to see Russia as I do, with eyes of love."

Interest spiked, as some Twitter users mused over the conspiracy.

I'm sure this was just a coincidence….lol

It was clear from beginning this was a set up against @JoeBiden He’s a Putin threat.

Omg!!! Thanks for posting this.
Wake up America!

Some began grabbing screenshots and sharing quotes from Reade’s writings.

"If you want to get my vote? Leave Russia alone," by Alexandra Traitor Reade, screen grabbed for posterity. pic.twitter.com/mcTz4glDim

Even a law professor from the University of Minnesota got in on the action.

The latest Biden accuser has multiple pro-Putin editorials on line. Apparently some are being deleted. Save screen shots if you have them. https://t.co/A3d7v4kjYd

Read this love fest for Putin by Alexandra Tara Reade.
Is this the same person who just made an accusation against @JoeBiden?
If so — this game’s up.https://t.co/B4CShgbiYp

Others quickly got angry that the liberal Twitterati were digging dirt on a woman coming forward with her alleged experience of an abusive man as if this could or should invalidate her story.

Just bc she has a favorable opinion of Russia doesn’t mean her story has any less validity. Two things can be true at once. This is really shameful and part of the reason why many women do not voice their discomfort with unwanted touching by men.

Am I the only one dismayed that a writer from the venerable Atlantic is propounding scenarios worthy of the most unhinged right-wing conspiracy theorist in order to defend a powerful male against women whom he has made uncomfortable with his bizarre touching? Sign of the times..

This is the same nudge-nudge-wink-wink sort of non-journalism the author vomited up to attack @davidsirota – it is not a surprise that people delete old tweets or articles when shitheels like this trawl their historic utterances for things to distract from other issues.

Sometime after the blogs were brought to public attention, the Medium posts were deleted by the author. Unfortunately for Reade, many of the posts are available on the Internet Archive’s Wayback Machine and Google caches.

Reade has not yet commented publicly on her blogs, nor has Biden’s office responded to her allegations.

Update 05:00am CT, Apr. 30: Reade contacted the Daily Dot to share her response to the public reaction that came after her story was published in The Union, addressing internet trolls and the conspiracy theory that she was a Russian agent or part of a scheme to smear Biden. Read her article in full here.