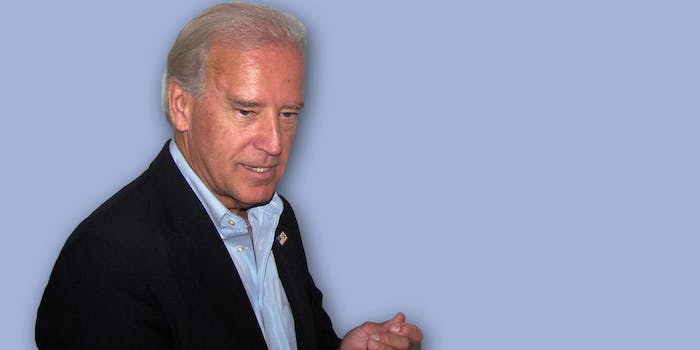 Joe Biden will not run for president in 2016

Joe Biden will not run for president in 2016.

After weeks of speculation and growing public support, the vice president said in a speech Wednesday that, as his family is still grieving for the death of his son Beau, he had decided to cancel any political aspirations he has for the upcoming election.

“I know from previous experience that there is no timetable for this process,” he said from the White House’s Rose Garden, with President Obama by his side, in a livestreamed speech. Speaking of the window of time to create a realistic presidential campaign, Biden said, “I”ve concluded it has closed.”

Biden’s impassioned speech advocated for a number of Democratic issues including the need to provide financial support for college students, to achieve greater progress for LGBT Americans and root out systemic racism, and to put an end to big money in politics. Expect Biden to champion these causes during the 2016 election season.

Unlike the Republican Party, which has a glut of potential candidates, the Democratic field is fairly small. While frontrunner Hillary Clinton, a former first lady and secretary of state, and Sen. Bernie Sanders (I-Vt.) have substantial followings, there’s little support for any other candidate, prompting speculation that Biden might have a great opportunity, though he was clearly on the fence about whether to run.

The week before, when CNN’s coverage of the first Democratic primary debates—with only five candidates, one of whom has since dropped out—the news outlet reportedly kept an emergency lectern in case Biden changed his mind.

Photo via chriskearns/Flickr (CC BY 2.0) | Remix by Fernando Alfonso III