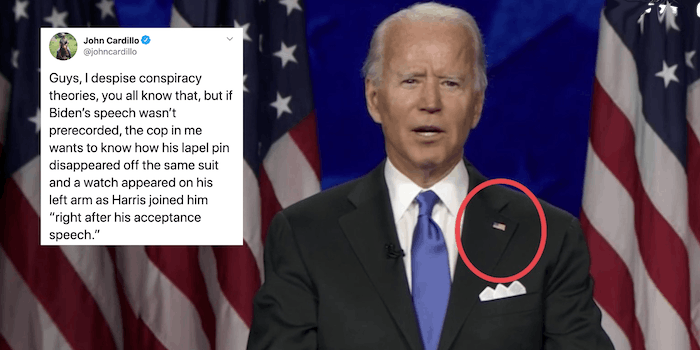 Journalists who were there are debunking the claim.

John Cardillo, a former New York City police officer and right-wing radio host, suggested on Twitter that something sinister was afoot after claiming that Biden’s lapel pin had disappeared mid-speech.

“Guys, I despise conspiracy theories, you all know that, but if Biden’s speech wasn’t prerecorded, the cop in me wants to know how his lapel pin disappeared off the same suit and a watch appeared on his left arm as Harris joined him ‘right after his acceptance speech,'” he wrote.

Cardillo’s tweet was not only shared by other conspiracy theorists but even earned a like from Donald Trump Jr.

But, as is usually the case, the conspiracy theory is entirely false.

As noted by numerous users online, the lapel pin on Biden was merely hidden from view due to his arm being raised in the photograph provided.

“The watch was up his sleeve and the pin is in the fold of his suit as his arm is raised,” @itsallprettybad said. “Please tell me you are not really a cop?”

The logical explanation, however, wasn’t enough to convince Cardillo.

Even as it became abundantly clear that Cardillo was wrong, the conservative commentator continued to double-down on the conspiracy.

“Why is this still posted when you’ve been made to look like a complete fool?” @mattmfm asked.

Despite being told that Biden’s speech was witnessed by camera crews and numerous journalists, Cardillo claimed that none of them were ever actually present during the speech.

Journalists who witnessed the speech, in which Biden accepted the Democratic Party’s presidential nomination, responded by tweeting out pictures they took as the former vice president spoke.

Rep. Ted Lieu (D-Calif.) also weighed in on the matter.

“You are wrong. Biden clearly has his lapel pin on after the speech while watching fireworks,” he tweeted. “In the pictures you included, Biden’s hand and the fold of the suit block the pin. Also his watch in one of your pictures is lower because, you know, gravity.”

Countless of other photos taken throughout the speech clearly show Biden’s watch and lapel pin present as well.

Given the current political divide, it doesn’t seem that conspiracy theorists, including Cardillo, will be convinced regardless of how easily debunked their claims are.