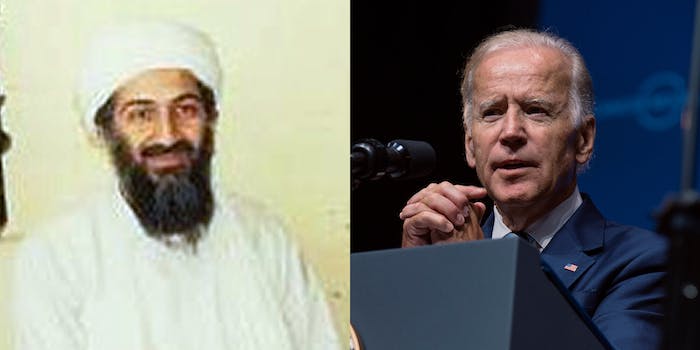 A year after the raid that killed Osama bin Laden, a Washington Post op-ed claimed that, based on documents obtained in the mission, bin Laden wanted to kill President Barack Obama.

Bin Laden’s writings were made public starting in 2015. In them, the notorious mastermind on the 9/11 attacks seemed to believe that Joe Biden, Obama’s vice president, was unqualified for the top job.

“Obama is the head of infidelity and killing him automatically will make [Vice President] Biden take over the presidency… Biden is totally unprepared for that post, which will lead the U.S. into a crisis…” bin Laden reportedly wrote.

Now, the people who ostensibly despise bin Laden, would never admit to him being right about anything, and who love killing terrorists are sharing his words as gospel.

Thanks to leading conservatives, the story also gained traction in the right-wing Twittersphere.

As these things usually do, it also made it’s way into Donald Trump Jr.’s feed.

The headlines make the discovery of bin Laden’s writings seem like a breathless revelation. But the articles later mention the initial findings were made in 2012.

Regardless, the stories are going viral now—and it’s downright impressive that conservatives are taking bin Laden’s side.