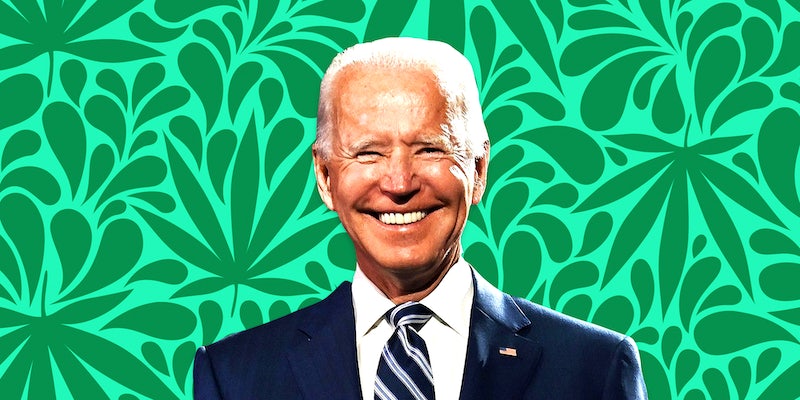 'Folks, Dank Brandon is about to puff puff pass some serious legislation.'

President Joe Biden earned a new nickname on Thursday after announcing his plans to pardon all prior federal offenses for simple marijuana possession.

The nickname, known as “Dank Brandon,” began spreading across Twitter as Biden called on governors throughout the country to issue similar pardons as well.

Biden’s nickname saga is now on its third iteration. It began last year after a newscaster mistakenly assumed that a crowd at a NASCAR race was chanting “Let’s Go Brandon” when they were actually saying “Fuck Joe Biden.” Let’s Go Brandon quickly became a way for conservatives to semi-covertly disparage Biden.

Sometime after, the term “Dark Brandon” arose and was mainly used to criticize Biden as well. But Dark Brandon was later co-opted by liberals and used to praise the commander-in-chief. Now, with his announcement on marijuana, which will also see the Department of Justice review how marijuana is classified under federal drug laws, Biden has become Dank Brandon.

Unsurprisingly, countless memes soon followed. Images of Biden smoking and even biting into pieces of marijuana became prevalent all over Twitter.

“The Dank Brandon memes: begun, they have,” one user wrote.

Many images featured Biden with red and green glowing eyes, a meme format often used by conservatives to paint right-wing figures as heroic.

The nickname quickly became a top trend on Twitter, resulting in an even greater influx of memes.

“Folks, Dank Brandon is about to puff puff pass some serious legislation,” another Twitter user said.

In a statement on the matter, Biden argued that the current government approach to marijuana “makes no sense.”

“We classify marijuana at the same level as heroin—and more serious than fentanyl,” the president tweeted. “It makes no sense.”

The White House says the pardons will affect more than 6,500 individuals and thousands more in Washington, D.C.

“There are thousands of people who were convicted for marijuana possession who may be denied employment, housing, or educational opportunities as a result,” Biden added. “My pardon will remove this burden on them.”