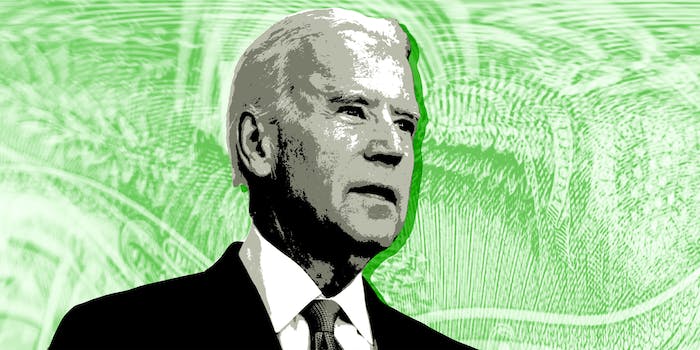 Joe Biden’s 2020 campaign isn’t even a week old yet, but the former vice president already proved he has the financial backers to run in this race. His team announced last Friday that they brought in $6.3 million, which beat out Beto O’Rourke’s first-day haul of $6.1 million and Sen. Bernie Sanders’ (I-Vt.) 0f $5.9 million.

And Biden appears to be pumping a lot of that cash into social media campaigns. At least, he’s certainly blowing out the other candidates in the past few days. A deep dive into the ad archives on Facebook, Twitter, and Google show Biden putting together some massive buys.

On Facebook, Biden spent a whopping $406,860 in his first two days as a presidential candidate.

The tech company beefed up their ad library ahead of the 2020 elections to show how much a candidate has spent over a recent week-long period (in this case April 21 to April 27). But Biden didn’t start running ads until April 25, meaning that he spent over $400,000 in two days.

By comparison, Bernie Sanders spent under $100,000 in that period and he was obviously a candidate for the entire time. Donald Trump spent just under $200,000.

Largely, Biden seemed to be spending small figures on ads, but there were cases where he forked over significant cash for single ads. Like this ad where he spent somewhere north of $10,000.

And Biden’s big-numbers push wasn’t just limited to Facebook; on Twitter he was spending furiously as well. He spent around $6,300 on this promoted tweet that includes a video of him announcing his launch, according to Twitter’s ad library.

In total, Twitter’s library has Biden in at spending a $207.8k on ads.

Joe Biden JUST announced he's running for President. And the amount he raises in the first 24 hours will be an indicator of how strong our campaign is. Can you chip in $5 to become a Founding Member and show everyone the strength of our movement?

In the 2016 election, President Trump’s use of Facebook targeting was considered an effective—yet divisive—tool.

Trump’s 2016 campaign digital media director has said on multiple occasions that Facebook was one of the top tools that helped them win the election, telling PBS, “We made, I think, over 5.9 million ads between the convention and general election and Election Day.”

Trump’s Make America Great Again Committee has blown all those numbers away, with a spend of $4,372,700. That makes him the second-highest political spender that Google tracks, after the Senate Leadership Fund, which is the Republicans juggernaut.

Biden is also pushing out huge figures on Google ads, but Google ads aren’t quite as unique as Facebook ads, which can be hugely customized. Here’s an example of a banner ad that Biden spent somewhere upwards of $50,o00 to put in front of internet users.

And here’s an example of a Google ad that Trump spent upwards of $50,000 to get in front of online surfers:

All candidates spend heavily their first few days in the race. The Google archive for Buttigieg shows a massive spike on April 13 — just before he declared his candidacy on April 14. You can see the same trend in O’Rourke’s numbers. But the difference is that Biden appears to be spending about as much in his first few days as the other candidates have spent during their entire campaigns.

In 2016, Donald Trump’s digital team crushed Hillary Clinton because, under Parscale, they got creative on Facebook. But that secret is out of the bag and Russian influence on Facebook has intensified the attention the platform receives in the political arena. 2020 promises to be the most online-influenced of every election. Paying for television spots is superfluous when a campaign can hyper-target possible voters online.

And if the early numbers are any indication, Biden’s team understand that the internet is perhaps their most powerful tool. And they’re going capitalize on it.