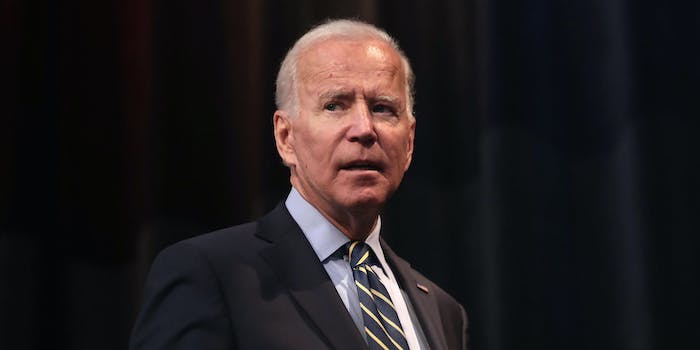 The tweets were about Brett Kavanaugh's accuser. But the claim lacks merit.

Last month, Tara Reade accused Biden of digitally penetrating her when she worked in his Senate office in 1993. Reade had previously alleged that Biden had touched her inappropriately on the neck, shoulders, and hair.

Biden denies the accusations. Staffers who worked in his office in 1993 have also denied Reade’s claim that she filed a complaint about it.

Last week, an unearthed video of a 1993 episode of Larry King Live was revealed to contain audio footage of a woman Reade says is her now-deceased mother asking what her daughter should do about “problems” with her employer, a prominent senator. The video led #DropOutBiden to trend on Twitter this weekend.

Reade’s story, and coverage of it, or lack thereof, has generated significant controversy for both the media and the campaign.

According to screenshots circulating on Twitter, Symone Sanders, one of Biden’s senior advisers, deleted numerous tweets about the Blasey Ford and Kavanaugh story after the accusations were made against Biden.

The allegations about Sanders’ deleting tweets were first made in late March. It is not clear when the tweets were allegedly deleted.

Sanders appears to have deleted significant portions of her Twitter history some time between last July and August, a few months after she joined the Biden campaign.

According to the Internet Archive Wayback Machine, as of last July, Sanders had tweeted 13,000 times. A month later, her total number of tweets had dropped to 1,400. Today her account shows that she has tweeted roughly 2,700 times.

Many of Sanders’ older tweets have also been deleted, indicating she used a service to scrub her timeline. There’s nothing that indicates she specifically deleted tweets relating to Ford and Kavanaugh.

The New York Times reports that Reade was among the women who came forward in March 2019 with accusations that Biden touched them inappropriately.

Sanders did not respond to request for comment sent this morning.

In the tweets, Sanders writes of “the patriarchy” silencing the voices of survivors, and criticizes Senate Republicans for disregarding Blasey Ford’s accusations. She heaps praise on Blasey Ford for her “courage” and “powerful testimony” and says that she did not get a fair hearing; rather that she herself was put on trial.

At the time, she also discussed the allegations on television in similar terms.

Many circulating the purportedly deleted tweets are ardent supporters of Biden’s political rivals.

Several claim that multiple staffers also deleted #MeToo tweets about Blasey Ford. Sanders is the only staffer whose allegedly deleted tweets are circulating, however.

At least one of Biden’s top staffers has not deleted their tweets supporting Blasey Ford.

Some have also accused prominent Biden supporters like Alyssa Milano of scrubbing their accounts following Reade’s accusations, as well.