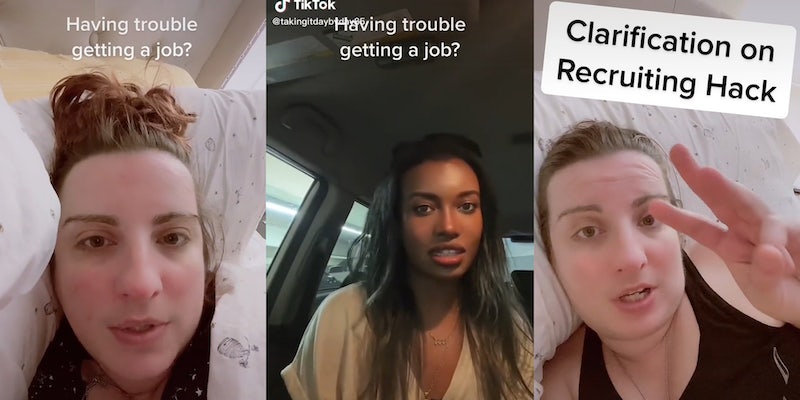 ‘These keywords will get you past the initial screening process, which is all robotic’: Recruiter exposes job hack to help you land interview

'I merely told you what we did that got candidates in the door.'

A TikToker has gone viral for detailing a job-hunting hack that reportedly increases the chances of landing an actual interview.

In a video that has been seen more than 965,000 times, TikTok user Anya Kitt explains how recruiters use a simple trick to manipulate the algorithms used by employers to scan resumes.

Kitt, who claims to be a former recruiter herself, says anyone can simply copy the list of duties from any job posting and secretly embed them into their resume.

Specifically, pasting the job duties into the border of a user’s resume on Microsoft Word and changing the text color to white ensures that the seemingly invisible text will be picked up by the algorithm.

“The reason why is that there’s an algorithm and these keywords will get you past the initial screening process, which is all robotic, to an actual person,” Kitt explains.

While it’s obviously preferable if the candidate actually possesses at least some of the skills necessary for the job they’re applying for, Kitt says the resume hack helps push candidates to the top of the list.

“We used to do this as recruiters all the time to get our candidates in above the rest,” she adds. “It’s not the most ethical but neither are these fucking screening algorithms so use the system.”

Yet Kitt’s video immediately received pushback from those who claimed the information was inaccurate or that the hack was outdated.

In a response video, Kitt stated that she had used the trick more than 7 years ago and was uncertain if it still was applicable, although she claimed in a previous video that some recruiters still use the hack.

“I do not know if it still works, I am not advocating for it, I merely told you what we did that got candidates in the door,” she said.

Kitt argues that job seekers can instead add the words used in the job description into the skills section on their resume.

Because a lot of you cant hear properly, here is clarification

The Daily Dot reached out to Kitt to inquire about her viral video but did not receive a reply by press time.

The video comes amid high inflation, layoffs in the tech sector, a drop in consumer sentiment, rising interest rates, and fears over a looming recession.