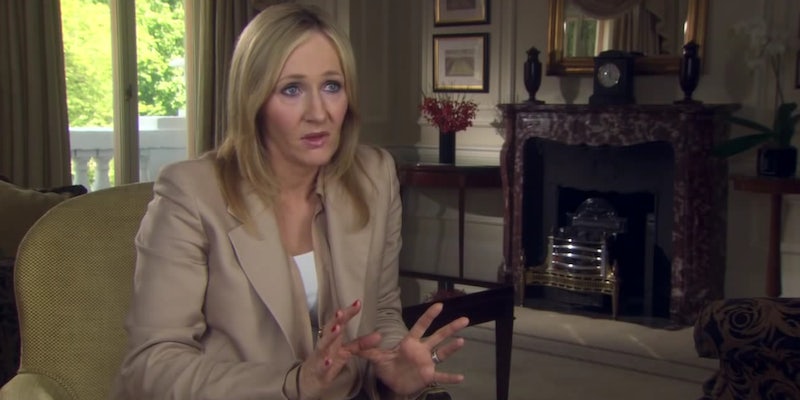 As a longtime supporter of LGBT rights, Harry Potter author J.K. Rowling was excited to hear the results of the marriage equality referendum in Ireland last week.

Replying to a tweet from a fan, Rowling joked that now Dumbledore (who is gay) and Gandalf would be able to get married.

Rowling often replies to fans on Twitter, so this dorky but heartfelt message was pretty normal.

Unfortunately, it was picked up by a member of the violently homophobic Westboro Baptist Church, who tweeted that the group would picket any potential wedding between Gandalf and Dumbledore. (A bizarre threat, given that both men both fictional wizards. But whatever.)

Not one to let hate speech slide on a public forum, Rowling hit back with a badass response.

Some fans disapproved of Rowling even acknowledging the WBC, an organization that thrives on public controversy and outrage. However, Rowling made it clear that her message wasn’t really intended for the WBC themselves, but rather for her own followers. As an LGBT ally, she wanted to strike back against homophobic behavior, and the WBC’s vitriol offered a good outlet.

@jk_rowling while i am in total agreement with you, giving them attention is counterproductive. that’s what they want.

I don't care about WBC. I think it's important that scared gay kids who aren't out yet see hate speech challenged. https://t.co/XumjDmEjuw