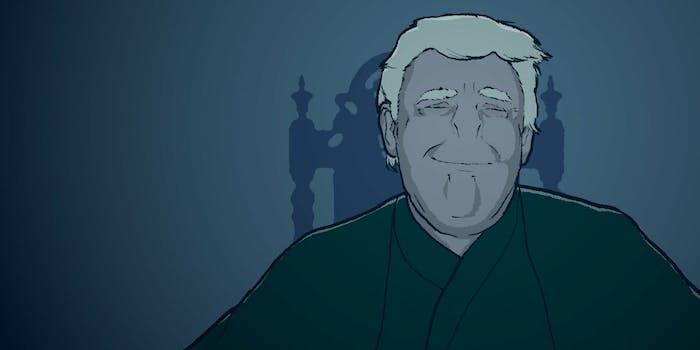 Trump and the Dark Lord have plenty in common.

Donald Trump drew the ire of the Internet, politicians, his fellow Republican opponents, and much of the rest of the world on Monday by calling for a “total and complete shutdown of Muslims entering the United States.”

While comparisons of Trump to Adolf Hitler and Nazism are now commonplace, he’s also getting compared to a Dark Lord of another nature—one that has affronted Harry Potter creator J.K. Rowling.

Potterheads are now comparing Trump to Voldemort, a bigot and the main source of evil and terror in the Harry Potter books. Voldemort committed horrific acts in order to mold a Wizarding World in his image and achieve immortality. And like other real-life dictators, he galvanized other Wizards and Witches to control, torture, and even kill people they considered to be second-class.

Fans have been lining up to make the Trump/Voldemort comparison.

The only way to stop Donald Trump is to destroy his Horcruxes. The wig is definitely one. If you need me I'll be finding the other six.

Maybe Donald Trump is a test to measure where you fit on the spectrum of evil. So if you still like Trump right now, you are Voldemort.

These comparisons made it all the way to J.K. Rowling, who had a surprising take on the subject. According to her, Voldemort may be evil, but he’s nothing compared to Trump:

How horrible. Voldemort was nowhere near as bad. https://t.co/hFO0XmOpPH

Voldemort and Trump have plenty in common, however:

Right now, the world hasn’t seen what Trump can do politically: He’s the Republican frontrunner for president, while Voldemort has been dead for nearly 20 years. Voldemort, meanwhile, may be personally be responsible for the deaths of thousands of Wizards, Witches, and Muggles in a spree spanning decades.

But there’s a key difference between the Dark Lord and Trump: Voldemort is fictional while Trump’s proposed policy would have real-world ramifications. If he were ever able to enact it, Trump detractors fear, the results could include increasing Islamophobia in the U.S. as well as anti-U.S. extremism abroad.

So far, all Trump has done is talk about harsh immigration policies. That’s a far cry from spending years trying to murder a single orphaned boy, as Voldemort did to Harry Potter; but hey, every great Dark Lord has to start somewhere.