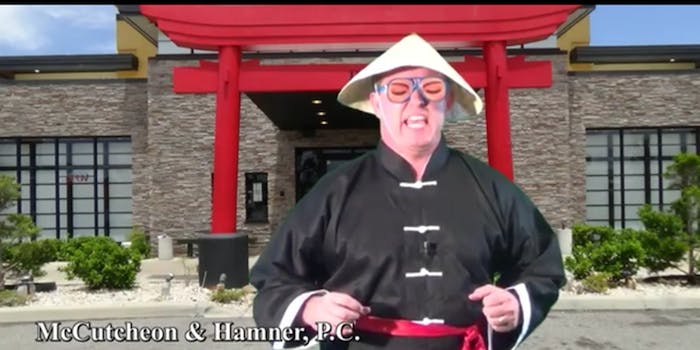 It gets even weirder from there. Who is Jim DeBerry?

Back in November, a Huntsville, Ala., personal injury law firm by the name of McCutcheon & Hamner allegedly partnered with a Florida media company called Definitive Television to produce a spot for the firm. The result was an offensive ad depicting Definitive Television’s owner, Jim DeBerry, doing an impression of a stereotypical Asian character named Mr. Wong Fong Shu. Now the law firm is trying to do damage control, claiming its YouTube page was hacked.

The 20-second clip is still active. In the video’s description, there’s a warning: “Our characters are intentionally provocative.” A few lines later: “In the world of politically incorrectness and the client’s 1st amendment right, we created this satire comedy video. This video is intentionally Cheesy B Rate.”

On Nov. 25, the law firm posted to its Facebook page, claiming:

McCutcheon and Hamner’s YouTube Channel has been hacked. Our firm did not approve the latest advertising commercial. We apologize to anyone who has watched the commercial. Our IT team has been working all morning to get the commercial taken off YouTube and find the person who is responsible for this action.

They also sent an update to the Above the Law blog, stating, “After a personal review of our financial records which conclusively established that this video was not paid for or authorized by any party associated with our law firm, McCutcheon & Hamner, P.C. posted our response specifically disavowing the video as well as issuing a cease and desist letter to Mr. DeBerry and Definitive Television.”

Meanwhile, DeBerry, who might not have the best understanding of what constitutes comedy or satire, has been making the rounds, defending his company and the ad. Yesterday, he responded to claims of racism in the most predictable way possible:

@HockeyTarheel @NPMRP #1 I’m not an attorney. #2 I’m not a racist, I’m a member of the NAACP who has black relatives. #3 #hockey #hattrick

He also denies any involvement in “hacking” the law firm’s YouTube page, though how the law firm came to be involved with Definitive, and how it could have never seen the finished product, or known what the content would be, remains a mystery. The video’s description further claims that “The copy or script is not ours, the client paid us and provided their copy/script. At this time, we will not confirm or deny if they firm ordered his video directly or indirectly.”

The Wire dug a bit deeper into DeBerry’s entrepreneurial past, which included running a pool company and a music venue. Perhaps DeBerry posted the video in an effort to get attention for his business, and the law firm indeed had nothing to do with it? Is this whole thing a hoax? The website DeBar Holdings claims Definitive Television will be launching on Dec. 31. On his Twitter account, the bio of which claims he’s a “proud Christian,” DeBerry has not exactly been helping his case.

More elitist #attorney scum. Bring it on! This punching bag will wear your lazy ass out