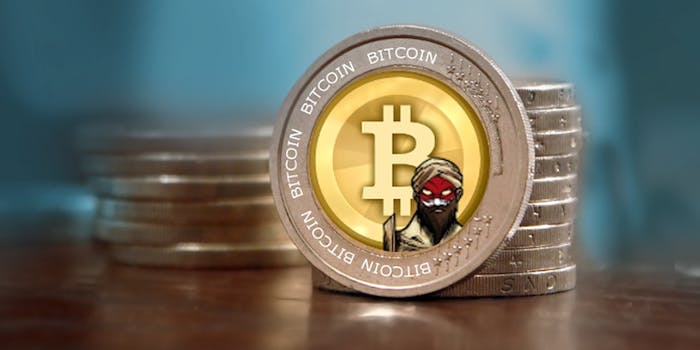 Could this ‘patriot’ hacker’s new app swing the Bitcoin markets his way?

"Every time I make a move on the Bitcoin Markets, you will know about it live," the Jester said.

Self-styled “patriot hacker” the Jester is probably the most famous pro-government hacker in the world. His Twitter bio boasts “Proud infidel, hacktivist for good. Pro pitier of fools. Bitcoin trader & developer of ‘Bitcoin Bud’ for Android. My laptop is in International Spy Museum, DC.”

I spoke to the Jester via encrypted chat about his latest accomplishment, Bitcoin Bud, a Bitcoin price tracker that comes with a built-in feed of trades the Jester himself is making, in real time.

Previously, he has focused on psychological operations, propaganda, and pro-government hacking. His hacking or DDoS targets include WikiLeaks, every country that has offered asylum to Edward Snowden, the Westboro Baptist Church, the Pirate Bay, and the Tripoli Post.

Now, he wants to be the most famous pro-government hacker turned Bitcoin app developer in the world, as well.

In a Jan. 19 blog post, the Jester, a longtime Bitcoin aficionado, announced that he had released an app for Android, one which would track the price of Bitcoin across several different markets.

The Jester himself claims to have done pretty well in Bitcoin by betting against the U.S. dollar and then selling once the seesaw tips to the other direction.

“I was an early adopter. Saw the benefits of it early on, maybe 3 years ago. So started playing with it. Then I started to talk about it on my Twitter and other places and people were asking me all about ‘What is Bitcoin?’ or do I get involved, etc. I personally like the volatility of the market, and since a few exchanges have popped up I have been swing trading Bitcoin against the dollar.”

Right now, Bitcoin Bud is Android-only, but an iOS version might be in the works, depending on Apple’s next moves.

“I notice lots of folks are asking for an iOS version but Apple are removing Bitcoin apps from the app store allegedly. I think it must compete with an upcoming product they may be developing themselves or something. So for now its Android only.”

As for how the Jester registered the appwithout revealing his real identity—something many have tried and failed to discern over the years—he wouldn’t give details, but did say it was all above-board and legal.

Are there any exploits in Bitcoin Bud?

“Absolutely none. I wouldn’t put a paid app out there if I was trying to exploit. A free one maybe, but not a paid, hopefully useful, service,” the Jester said.

And does the app actually allow people to trade or exchange bitcoins?

“No ma’am. I am not opening myself up to that. It simply allows people a window on to my movements on the markets. I don’t want to add any in-app financial transactional functionality.”

There are already hundreds of Bitcoin price tracking apps in the Google Play store, so why this one? Why now, when he’s been in the Bitcoin market for years? He says it’s because so many people want to know what he’s doing on the market, so they can follow along.

“‘Bitcoin Bud’ for Android is directly linked to my ‘JayTrader’ server, which is in turn linked to the 3 major Bitcoin exchanges (MtGox, BTCe and Bitstamp) via their API’s for realtime price data. It’s like having me in your pocket. Every time I make a move on the Bitcoin Markets, you will know about it live with a notification on your device.”

“I’ve been trading a while now and the app just gives real time notifications when I make a move on their Android device. They can choose to follow or not. I’m just allowing people to see what I am up to in real time. There are no ads or in-app payments. It isn’t a wallet or an app that will make a trade, either. It’s literally a trading signals provider. Given what I am known for, I wouldn’t create an app that required any financials from people. I don’t think it would float too well.”

It’s also uni-directional, giving users up-to-the-minute information on Bitcoin and the Jester’s trades, but giving him nothing (except $4.36) in return. “I get zero information about the user. Google handles the payment for the app through the Play Store—the app is meant to help people, nothing more.”

So it’s a price comparison app that compares only three markets, but also interposes a live feed of what the Jester himself is trading, so that you can get in on it. He freely admits that part of the point of the app is to enable this broadcast effect, amplifying any swings in the market in the direction he wants.

If Bitcoin were traded on a federally regulated exchange, this would be governed by law, but because Bitcoin remains largely unregulated, it’s perfectly kosher. The Jester is also doing what is called “front-running,” getting the best price for buying Bitcoin, then informing his followers, who are welcome to dive in and buy after that, driving the price up. Once the price is high enough, the Jester sells out. When he sells, they presumably all sell too, driving the price back down and creating a buying opportunity for the Jester and his followers, ad infinitum.

That, too, is something that is given the side-eye on stock exchanges, although common enough in practice.

A Bitcoin trader I spoke with at Vancouver Hackspace told me that a mere $5,000 would be enough to control the market for Bitcoin in Canada, and that the U.S. market would be similarly vulnerable, although presumably ten times as expensive. With enough money and enough investors on your team, you could presumably set your own price for Bitcoin.

That, the Jester cautions, is premature at this point. “That may be a side-effect if MILLIONS of people were to use it and follow it. It’s more in response to people asking me all about Bitcoin. Instead of trying to tell them, I decided to create the app to SHOW them, kinda like putting my mouth where my money is so to speak…”

On the question of whether there was an arbitrage to be done across various markets, taking advantage of the difference in price between various Bitcoin markets, the Jester said, “I think there’s definitely room to play arbitrage across the markets, but to make it worthwhile you’d have to pump ‘n dump high volumes back and forth. I mean really high volumes.”

“I figured if people use it, the signals become a self-fulfilling prophecy,” he explained. “It’s the age-old supply and demand rule right? More people buy, price goes up, more people sell, price goes down.”

As for the JayTrader platform which he claims to have invented, it is not a fully-formed trading platform, but works just fine as an automated tracker for his personal account.

“The app itself didn’t take long at all [to develop] but the JayTrader system that powers it behind the scenes was ‘a challenge’. Thats the server that makes the decisions, detects market conditions and feeds the app the buy/sell signals.”

“JayTrader looks at 3 markets as a whole and watches for the conditions to be right for a move; when it detects this it pushes out signals to the Android App. People don’t have to follow the signals, I’m merely showing what I am doing. nothing more. It’s not doing too badly so far. I can set it to either just send out a signal or execute a trade. Right now, like I said, I’m putting my mouth where my money is, so it executes for me too. You’ll notice the signal does not include the volume in dollars or Bitcoin that I am trading. I am not foreseeing a time when I will disable trade execution.”

“I have multiple wallets, my personal trading wallets are not publicly known. But if you are looking to see if the App is accurate, it’s really easy to see from within it, there’s a 10 trade history of everything.”

As to the future, he has his eye on the entire digital currency market: “If this version of the app for Bitcoin is a hit, I’ll definitely expand it to other cryptocurrencies.”

Correction: A previous version of this story contained assertions about hacking tools the Jester has worked on. The Daily Dot was unable to verify their accuracy and, as such, they have been removed from the story. We regret the error.