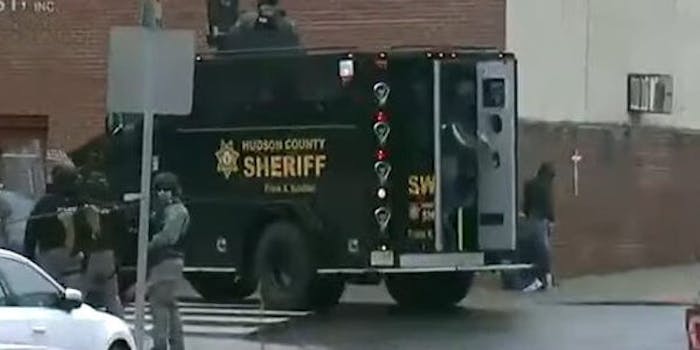 It is not yet known which platform suspect David Anderson used.

One of the suspects in yesterday’s Jersey City mass shooting that left six dead, including the shooters, posted anti-Semitic and anti-police materials online, the New York Times reports.

The shooting began yesterday morning at a cemetery. There, Detective Joseph Seals approached a stolen U-Haul van linked to a homicide in nearby Bayonne, New Jersey over the weekend. One of the suspects fatally shot Seals, a married father of five. The two, a man and a woman, then drove about a mile to a Jewish grocery store.

A shootout and lengthy standoff with police ensued. The suspects killed three Hasidic Jews at the store before police fatally shot both. Two officers were wounded, and are expected to make a complete recovery.

This morning, NBC New York reported that the suspects were David Anderson and Francine Graham. Anderson was reportedly once a member of the Black Hebrew Israelites, whose members believe they descend from ancient Israelites. A neighbor told the outlet that Graham became a “dark person” after meeting Anderson.

Officials said that the pair were armed with long guns, lots of ammunition, and had bomb-making materials inside the van, NBC reports. During the shootout and standoff, schools were on lockdown and traffic ground to a halt.

Multiple outlets in the press have reported that two of the victims in the grocery were store owner Leah Minda Ferencz and customer Moshe Deutsch. The third victim from the store has not yet been identified.

Jersey City Mayor Steven Fulop tweeted this morning that the suspects targeted the Kosher store. Footage reportedly showed the two bypass others on the street as they headed to the store.

The New York Times reports that a “manifesto-style note” was found inside the van. The short, “rambling” note reportedly did not contain any information about their motive. Based on information now known, the killings will likely be classified as a hate crime.

Although his murder has not yet been officially linked to the investigation, several outlets indicated it is possible that Seals was investigating the murder of Michael Rumberger when he approached Anderson and Graham at the cemetery.

Rumberger, a 34-year-old driver, was found deceased in the trunk of a car in Bayonne Saturday night. His daughter has launched a fundraiser to pay for funeral expenses.

It is not yet known which platform Anderson posted anti-Semitic and anti-police materials on.