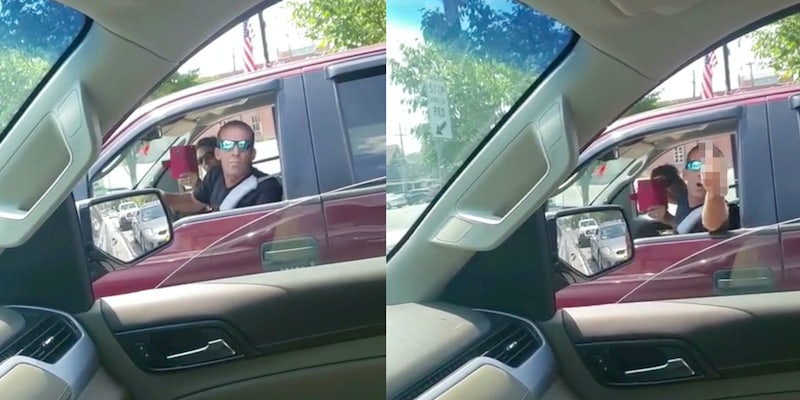 A video circulating on social media shows a Jewish musician being harassed and threatened in a road rage incident by a white man and woman spewing anti-Semitic vitriol in Monticello, New York.

Isaac Bernath of Brooklyn, New York, says he was pulling out of a gas station early Tuesday afternoon when he was verbally attacked by a man and a woman in a red pickup truck.

“Coming towards me from behind was this pickup truck who apparently got aggravated that he needed to slow down so he wildly cut me off and then blocked me in when there was a double parked van on my side,” Bernath told the Daily Dot via Instagram. “Once he let me through, I cut him back so he [couldn’t] block me in again…He then pulled up beside me and started threatening me with violence at which point I started filming.”

The man in sunglasses is seen screaming at Bernath, “Go back to fucking Brooklyn.” While raising his middle finger, he yells, “to all you fucking…non-tax paying scumbags.”

“Your whole fucking religion, take that,” he says. “Put that on the Internet.”

Bernath calmly records the incident. The woman behind the man is also seen recording the incident with a tablet while sporadically yelling, “Go back to Brooklyn,” or repeating other comments the man makes.

Bernath, who wears a kippah, says he has faced anti-Semitic harassment before but that it’s never lasted this long or been triggered by road rage.

“Like I said, I love my neighbors,” said Bernath, who lives in Monticello for two months every year. “It’s just those who cause trouble that’s an issue.”

He went to the police to show the video right after the incident, he told the Daily Dot over the phone, but decided not to press charges.

“I don’t think destroying his life would accomplish anything,” he said. “He said put this video on the internet, and I did.”

Bernarth shared the post on his Instagram and YouTube on Tuesday, and the videos were removed by both platforms. But he soon realized others were resharing it on Twitter and other Instagram pages, where the video had received thousands of views, so he re-uploaded the video to Instagram on Tuesday evening.

⛔Foul Language⛔ Dear instagram, This video was removed for the wrong reason. Antisemitism? Alive and well, thanks for asking.. This happened to me around noon today. #antisemitism #monticello #local #hillbilly #roadrage #slurs #madman

“I’m from Monticello and this saddens and embarrasses me,” one user commented on his Instagram post. “In my 38 years of living there my family and I have never witnessed the recent acts of Anti-Semitism as of late. The environment in this country is disgusting.”

Anti-Semitic attacks have seen a rise globally, with incidents in 2018 being significantly higher than previous years, Reuters reported in May. The U.S. is one of the countries with the most attacks.