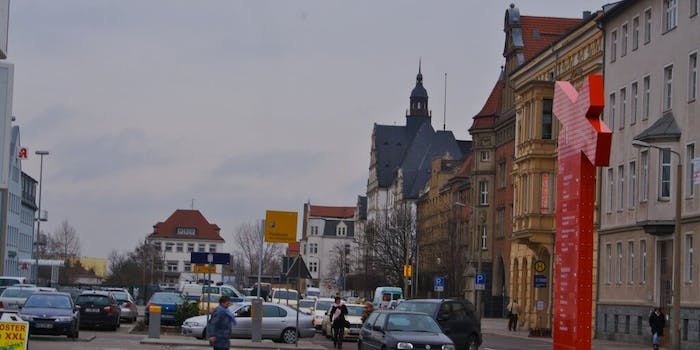 The man responsible for killing two people and injuring two more near a synagogue in Halle, Germany, on Oct. 9, allegedly posted a manifesto on anime message board Meguca, which has loose ties to 4chan, BuzzFeed News has reported.

Stephan Balliet, 27, has since confessed to the attack, which he carried out with an automatic rifle and homemade weapons, such as a hand grenade. While he unsuccessfully tried to enter the synagogue on Jewish holiday Yom Kippur, he killed two people nearby with his homemade weapons. He live streamed the attack for 35 minutes on Twitch, in which he called Jews the “root of all problems.”

His alleged manifesto mirrors the anti-Semitism he spewed during the live stream. Prior to the attack on Wednesday, he detailed on Meguca how to make homemade weapons “For all of you, who live in no fun countries,” presumably referring to countries with strict gun control laws.

“Over the past years I build and tested different improvised weapons,” the post read, per BuzzFeed News. “Of course, there are dozens of improvised designs out there, so what’s special with mine? Simple, I prefer live testing.” He then added a link to Twitch channel “spilljuice.”

Meguca has loose affiliations with 4chan’s anime board, but it is otherwise an independent site.

The shooter interrupted what was a chat about video games and anime with his post. When people realized that he was carrying out the attack and live streaming it, roughly ten minutes after his post, users expressed solidarity with him and attempted to record the live stream.

“I hope he’s okay, and succeeded,” one person wrote, per BuzzFeed News. “Godspeed anon, I’ll stay with you if this is it … Quick, how do I save a broadcast in progress?” another questioned.

Following the attack, Twitch shared a thread from its official Twitter account, explaining why the stream’s live audience consisted of merely five people and then the subsequent 2,200 people who viewed the recording.

“This video was not surfaced in any recommendations or directories; instead, our investigation suggests that people were coordinating and sharing the video via other online messaging services,” Twitch wrote.

Twitch has a zero-tolerance policy against hateful conduct, and any act of violence is taken extremely seriously. We worked with urgency to remove this content and will permanently suspend any accounts found to be posting or reposting content of this abhorrent act.

The attacker’s alleged manifesto, also posted to the site, was shared through three PDF files, consisting of 16 pages.

In the manifesto’s portion of “The Objectives,” the shooter expressed that he wanted to “1. Prove the viability of improvised weapons. 2. Increase the moral [sic] of other suppressed Whites by spreading the combat footage. 3. Kill as many anti-Whites as possible, jews preferred. Bonus: Don’t die.”

The manifesto also has a video game-style “achievements” section, which read, “Chosen to die – Kill a jew,” “Midnight Genocide – Kill 3 [n-words] between 11pm and 1 am,” and “Think of the children! – Kill a kikelett.”

The gunman has been charged with two counts of murder and seven counts of attempted murder, according to the BBC.