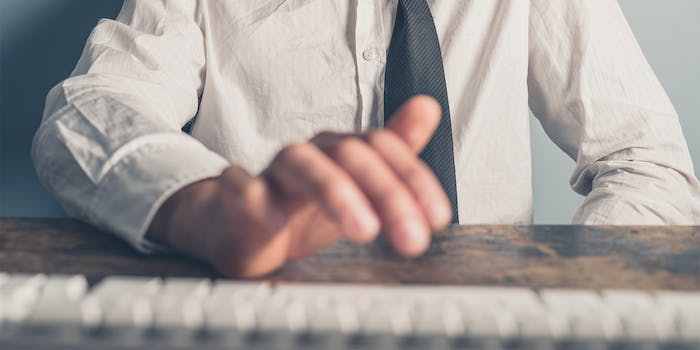 You don't have to defend sexual harassment. Ever.

Yesterday, media Twitter was utterly agape at the news that one of the more esteemed reporters of a generation, Jeffrey Toobin of the New Yorker, exposed himself in front of a number of other generationally-acclaimed journalists on a Zoom call.

The release of the news was a (probably intentional) masterclass in obfuscation, with the New Yorker, CNN (where he also works), and Toobin putting out statements calling it alternatively “accidental,” an “incident” and a “personal matter.”

While the coronavirus pandemic has created a situation where home and work life have blurred a touch, there’s no denying what happened. An employee publicly masturbated in front of coworkers during a work meeting. That’s it, that’s all there is to it.

Unless you happen to be a man, in the media, who instead of tweeting “damn, don’t jack it in front of anyone,” or “damn that is sexual harassment,” instantly chose to defend Toobin and therefore defend sexual harassment, allowing Toobin’s insistence that it was an accident to carry the narrative.

Here’s CNN’s Brian Stelter, who is worried what it might mean for CNN to be absent one talking head out of its lineup of 1,000 in the run-up to the 2020 election.

As detailed in this good thread, many sexual harassers play down what they’ve done as “accidental” to avoid accusations and prosecutions, so what Toobin says here should have no weight whatsoever. And even if you absolutely utterly believe his version of the events, he was video sexting in the middle of a work meeting with his colleagues, which is FUCKING ABHORRENT.

You’d like to believe that many of the men in media, which has faced numerous incidents of sexual assault and harassment, would think not to defend this. Or would have learned something in the past three years. You’d be completely wrong.

Vox’s German Lopez wrote on Twitter, “Not sure someone getting caught doing something almost everyone does should be a national story,” which is a willful misreading of the Toobin story.

Ditto the Atlantic’s Conor Friedersdorf, who blamed the pandemic.

“When Occam’s Razor suggests someone humiliated himself through a combo of technological error, pandemic circumstances, bad judgment, & bad luck, it seems like we should react w/ empathy, politeness, & forgiveness, as we would want to be treated, rather than punitive mockery,” he wrote.

“Do you want to be the type of person who accuses me of jacking off at work?” Friedersdorf essentially asks. Which, well, I don’t have to be. I’ll just link to the tweets in 2019 where he got mad at people shaming comedian Louis C.K.