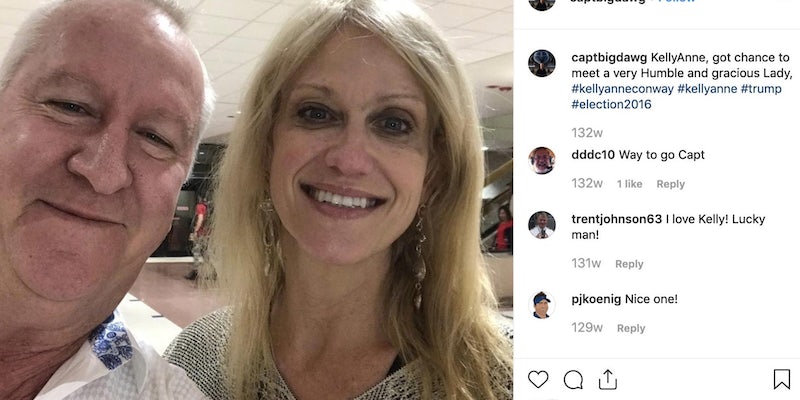 He was pictured with Trump's longest-serving White House aide.

The news cycles in the Trump era move so quickly that a story can be the only thing anyone is talking about one day, and totally forgotten the next.

But the arrest of financier and convicted sex offender Jeffrey Epstein has managed to stick around since it first broke on July 6. Part of this can be attributed to the powerful people in Epstein’s orbit, and part of it to the sheer luridness of the charges against him, sexual trafficking young girls to his various properties, even after getting an apparent sweetheart deal… from a U.S. attorney later appointed to Trump’s cabinet. It’s a lot.

In fact, it’s so much that a universe of conspiracy theories and hoaxes quickly emerged. Some pulled in accusations from the QAnon and Pizzagate spheres, including QAnon posts about supposed tunnels under Epstein’s properties and Satanic rituals involving sex and human sacrifice. QAnon is the ongoing conspiracy that maintains a secret group of deep state officials is working to undermine President Donald Trump.

Others were the reflexive defenses of Trump supporters trying to put daylight between the president and Epstein. As the case has moved forward, more rumors and hoaxes have emerged, with many getting enormous attention in spite of being either speculation or already proven untrue.

Here are more of the biggest Jeffrey Epstein conspiracy theories and hoaxes:

A few days after Epstein’s arrest, an Instagram picture emerged that appeared to show Epstein pilot Larry Visoski posing with senior Trump adviser Kellyanne Conway on Dec. 28, 2016, in Palm Beach—long after the last time Trump claims he spoke with Epstein.

Visoski, going by the screen name “CaptBigDawg,” appears to be smiling as he posed with Conway, whom he called a “very Humble and gracious Lady [sic].” A day afer it started making the rounds, both it and Visoski’s Instagram page have been deleted. But Visoski definitely is (or was) Epstein’s personal pilot, and Conway was in Palm Beach at the time.

While the picture is almost certainly real, there’s no indication of anything sinister behind it, or any particular significance to it at all. It might be true that a senior Trump adviser met with the pilot of a convicted sex offender, but that doesn’t mean either Conway or Trump ever met with Epstein around the time it was taken.

She might not have even known he had a connection to Epstein. It’s simply a picture of two people, not evidence of a sinister conspiracy or horrible crime. For the record, Trump was in Florida at the time—the 28th was the day of his bizarre press conference with Don King at Mar-A-Lago.

With Epstein being held in the federally operated Manhattan Correctional Center, the massive blackout that hit Manhattan on July 13 was seen by QAnon believers as just a bit too convenient. Very quickly, conspiracy theories started flying that the blackout was pulled off by the deep state via either sabotage or an electromagnetic pulse (EMP) as a way of getting Epstein out of prison before he could start naming names.

To be clear, there is no evidence that the deep state used an EMP to shut down a fairly small part of the electricity in Manhattan.

An actual EMP going off would devastate the entire city, and shut down every form of electronics—including the ubiquitous cell phones used to record the blackout’s aftermath. But the biggest element that falsifies this conspiracy is that the Manhattan Correctional Center is substantially far from the actual area that was blacked out—it’s in Lower Manhattan, while the blackout was localized to the west and south of Central Park, over six miles from the prison.

Epstein remains in prison and was at a bail hearing after the blackout. So if it was meant to cover his escape, it was a miserable failure.

Could the president’s racist tweets, directed this time at four outspoken first-term members of the House known as “the Squad,” be a clever ruse to shift media attention away from his former friend, and in particular, the lurid contents of Epstein’s safe?

It’s not in evidence either way, and it’s entirely possible Trump is doing this to divert attention away from Epstein’s crimes and his potential links to them.

But it’s also not like this is something new for Trump, who began his campaign in 2015 with a speech declaring Mexico is “sending” rapists and drug dealers across the southern border. Maybe Epstein really did have diamonds and a fake Saudi passport in his safe, but Trump unleashes Twitter tirades at far more insignificant provocations.

Finally, Epstein’s case will drag on for months and years—when it’s likely that Trump’s feud with “the Squad” will burn out far sooner. So if it’s meant to be a distraction, it’s not going to distract anyone for long.

Epstein will be the first military tribunal of “the Storm”

Some QAnon believers have moved on from the attempted breakout that never happened to claim that Epstein will be the first of the long-foretold military tribunals that will mark the beginning of Q’s purge, “the Storm.”

Why? Because, as this anon claims, Epstein was arrested on his private airplane, and never touched U.S. soil—thereby making him subject to military law, not U.S. law. The trial of pedophiles and Democrats via military judgment, rather than civil courts, is a major part of the QAnon mythology, and if this turns out to be true it would go a long way toward proving the efficacy of Q’s claims.

It’s not clear from the reporting whether Epstein was actually arrested on his plane, or after having disembarked at Teterboro Airport in New Jersey. It also doesn’t matter. An airport is not subject to either international or military law, while  U.S. law is clear that civilian courts will try civilians as long as they’re functioning.

Military tribunals for non-combatants are illegal, and there’s no evidence that any contact Epstein is having with the justice system is taking place outside of normal American jurisprudence.

Assuming Epstein’s situation drags on without him pleading guilty, expect to become more lurid, and more conspiracy theories and hoaxes to emerge on both sides of the political aisle. Some will be nonsensical, and others will require a little more critical thinking to debunk.

As always, be skeptical of anything you read about Epstein.