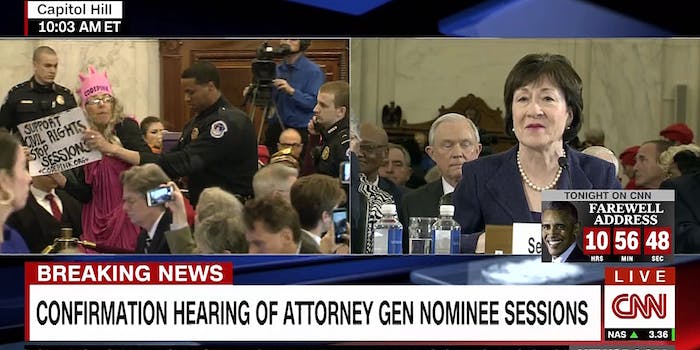 One protester, dressed in KKK garb, yelled, 'You can't arrest me, I'm white!'

The Senate’s confirmation hearing for Sen. Jeff Sessions, President-elect Donald Trump‘s pick for attorney general, is off to a rocky start.

Sessions, a 70-year-old Republican senator from Alabama, appeared before the Senate Judiciary Committee on Tuesday morning for the first of seven separate confirmation hearings scheduled this week. Republicans are attempting to get as much of Trump’s cabinet in place as possible before he’s sworn in on Jan. 20.

Disruptions began early into the hearing when police ejected two activists dressed in Klu Klux Klan costumes were ejected from the Senate confirmation hearing for on Tuesday morning.

Recalling his record, protesters chided Sessions as millions of viewers watched on CSPAN and CNN. “His record is evil!” one protester yelled as security carried her out. Two men dressed as Ku Klux Klan members, the first to removed by security, yelled, “You can’t arrest me, I’m white!” and “White people own this government!”

There are like 20 Code Pink/other protesters here; first one sarcastically yelled "you can't arrest me, I'm a white man," while dragged out.

Later in the hearing, police removed a protester with the women-led civil rights group Code Pink. “Why am I being taken out of here?” the woman yelled. “This man is evil. You’re evil!”

As Sessions began to read his prepared remarks, two men began chanting “No Trump. No KKK. No fascist U.S.A.” They too were removed from the hearing.

A sixth protester disrupted the hearing a few minutes later by screaming obscenities including calling Sessions a “motherfucking pig,” a comment that aired live on CNN.

Session’s controversial record on civil rights has been a contentious issue since Trump nominated him.

In 1986, the Senate Judiciary Committee rejected Sessions nomination to become a federal district judge in Alabama on the basis that he had made a number of racially insensitive statements.

During the more than 19 hours of testimony 30 years ago, Sessions attempted to dismiss the accusations of prejudice against him—Sessions had called a number of civil rights groups, including the NAACP Defense Fund, “un-American”—while apologizing for once saying members of the KKK were “OK until I found out they smoked pot.”

In March 1986, Sessions referred to a white civil rights lawyer as a “disgrace to his race,” NPR reports. A month later, he denied even making the comment.

After losing the judgeship, Sessions remained a chief federal prosecutor in Alabama for five years before he was elected state attorney general. After two years, he became a U.S. senator and was re-elected three times. He is widely considered one of the most conservative members of the Senate.

Sessions on Tuesday said the accusations of racism against him were “damnably false charges.” In a prepared statement, he said he understood the legacy of civil rights in America and the “horrendous impact that relentless and systemic discrimination and the denial of voting rights has had on our African-American brothers and sisters.”

Responding to an opportunity by Sen. Lindsey Graham (R-S.C.) to clear the air, Sessions claimed that in 1986 there was a concerted effort to characterize him as a racist, and that, at the time, he was not properly prepared then to defend himself. “It was very painful. I didn’t know how to respond and I didn’t respond very well,” he said, adding that hopes his record in the Senate has absolved him of those accusations.

“It wasn’t accurate then. It is not accurate now,” Sessions said. “I just want you to know that as a Southerner, who actually saw discrimination, and have no doubt it existed in a systematic and powerful and negative way, to the people—great, millions of people, in the south, particularly, of our country: I know that was wrong. I know we need to do better. We can never go back.”

Sessions added that he was “totally committed to maintaining the freedom and equality that this country has to provide to every citizen.”

Soon after these comments, another protester stood up and was ushered out by police.

Correction: An earlier version of this article misstated the date of Sessions’ first committee hearing before the Senate Judiciary Committee.