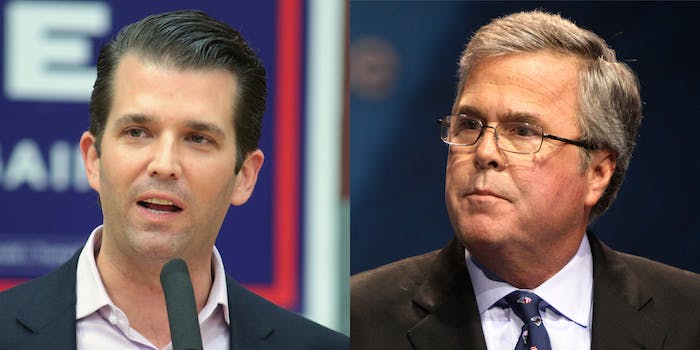 In a speech at Yale on Tuesday, former Republican presidential frontrunner Jeb Bush took a shot at the children of President Donald Trump, claiming they don’t love their father.

In the 2016 Republican presidential primary, Trump thoroughly thrashed Bush, the early front-runner. Bush had the backing of all the major donors and all the major players, and couldn’t win a single state, falling to a brash-talking, uncouth reality television star.

It sounds like he still hasn’t recovered from the experience.

“I’m not going to talk about the 2016 election … I’m still in therapy,” he said. Then he took a dig at the president.

As opposed to Trump, Bush said, he goes home to children “who actually love me.”

That shot didn’t sit well with the Trump sons, who both went after Jeb, mocking both his campaign nickname and one of his more embarrassing campaign moments.

Also love that he learned enough about politics in a few weeks to dismantle you piece by piece despite it being your life’s work https://t.co/4fcnA1AgAa

Say what you want about the Trump children, those are solid burns.

Neither Ivanka nor Tiffany chimed in.