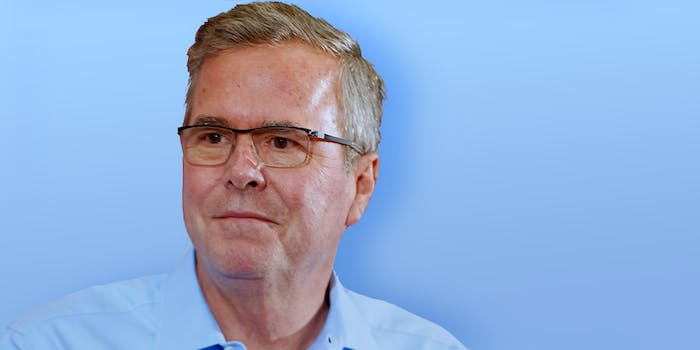 Republican presidential candidate Jeb Bush would order technology companies to build backdoors into encryption and give the federal government special access to users data if elected, he said during Thursday night’s primary debate.

Asked about the cybersecurity challenges faced by the United States, Bush said the Obama administration has “failed us completely” and called cyber issues “the first priority.”

Bush then laid out the beginnings of a strategy to implement backdoors into American encryption.

Encryption is code that scrambles data so only the intended recipients of data can receive it. It plays a crucial role in Internet activities like browsing the Web, reading email, engaging in online commerce, and communicating.

“There needs to be complete dialogue with large technology companies. They understand there’s a national security risk.”

Fox Business host and debate moderator Neil Cavuto said that Apple CEO Tim Cook would not reveal private data by inserting backdoors into Apple devices and asked if Bush, as president, would order Cook and other tech executives to do so.

“There needs to be complete dialogue with large technology companies. They understand there’s a national security risk,” Bush said. “We ought to give them a little bit of liability relief, so if they share data amongst themselves and share data with the federal government, they’re not fearful of a lawsuit.”

“Because this is a hugely important issue,” he explained. “You can encrypt messages. ISIS can, over these platforms and we have no ability to have a cooperative relationship…”

Cavuto asked Bush, “Do you ask—or do you order?” referring to potentially forcing technology companies into sharing encrypted data.

“Well, if the law would change, yeah,” the former Florida governor said, though he added that being “too punitive” could have negative consequences.

Sen. Richard Burr (R-N.C.) and Sen. Dianne Feinstein (D-Calif.) currently have legislation in the works that would “pierce through encryption,” as Feinstein put it in December. Encryption has been at the center of a global debate on cybersecurity and privacy that is increasingly being spotlighted in the U.S.

The law might very well change by the time a Jeb Bush presidency—were he to win—materialized, meaning he could realistically order backdoors to be built and utilized.

Modern Apple iOS and Google Android devices are encrypted by default, a move that has renewed the decades-old debate over privacy and encryption. But Apple and Google phones still give away huge mountains of data, even if encryption is now a part of their systems.

Bush noted that people might simply adopt foreign products were U.S. firms forced to compromise their encryption for law enforcement purposes. Since “we also want to dominate this from a commercial side, there’s a lot of balanced interests,” Bush said.

Bush didn’t explain how he would prevent companies outside the U.S. from taking American business by offering strong encryption without backdoors. Both the French and Dutch governments recently came out against backdoors, which a consensus of technologists say will create insecurity and violate privacy.

The Bush campaign did not respond to a request for comment in time for publication.

Bush’s tough talk on encryption is orthodoxy for the top-polling 2016 Republican presidential campaigns, even a little on the subdued side. New Jersey Gov. Chris Christie and Sen. Marco Rubio (R-Fla.) want to expand NSA surveillance, Donald Trump threatened “closing up the Internet” as part of the fight against the Islamic State, and Ohio Gov. John Kasich says “encryption is a major problem.”