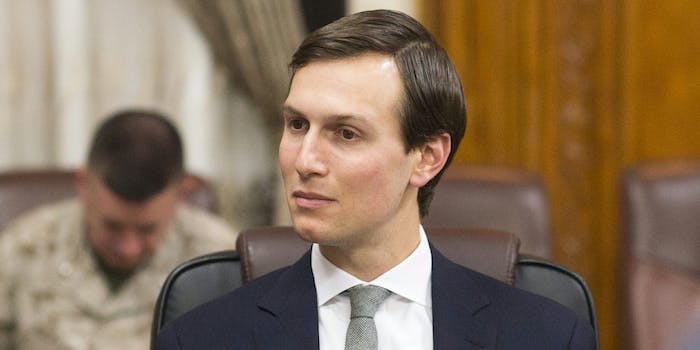 Kushner says in prepared testimony that he recalls 4 specific meetings.

Senior White House adviser Jared Kushner will testify on Monday before the Senate Intelligence Committee, detailing every contact he had with any Russians throughout President Donald Trump‘s 2016 campaign.

In his prepared statement, Kushner, Trump’s son-in-law, strenuously denies that he colluded with the Russian government to help elect his wife’s father and says that at no moment in the campaign did he witness anything of the sort:

“I did not collude, nor know of anyone else in the campaign who colluded, with any foreign government. I had no improper contacts. I have not relied on Russian funds to finance my business activities in the private sector. I have tried to be fully transparent with regard to the filing of my SF-86 form, above and beyond what is required.”

Kushner has come under congressional scrutiny after reports revealed he’d updated his security clearance forms detailing contacts with entities of foreign government, which raised the specter that the adviser was attempting to hide his actions. Kushner said that was not the case:

“It has been reported that my submission omitted only contacts with Russians. That is not the case. In the accidental early submission of the form, all foreign contacts were omitted. The supplemental information later disclosed over one hundred contacts from more than twenty countries that might be responsive to the questions on the form. These included meetings with individuals such as Jordan’s King Abdullah II, Israel’s Prime Minister Bibi Netanyahu, Mexico’s Secretary of Foreign Affairs, Luis Videgaray Caso and many more.”

Kushner goes on to detail, to the best of his “recollection,” all contact he had with any person who possibly had any ties with the Russian government. He says he met Russian Ambassador Sergey Kislyak at an event at Washington, D.C.,’s Mayflower Hotel (an event for which Attorney General Jeff Session is now facing scrutiny) and says that that meeting consisted of nothing more than exchanging pleasantries.

Although Reuters reported Kushner had two phone calls afterward with the ambassador, Kushner says a review of his phone records did not show those calls took place, adding that, “In fact, on November 9, the day after the election, I could not even remember the name of the Russian ambassador.”

Kushner also addresses the now-infamous Donald Trump Jr. meeting at Trump Tower on June 9, 2016, which Kushner also attended. Kushner describes in detail his actions that day, saying he did not review the email exchange setting up the meeting, which said it would be about information that was detrimental to Democratic candidate Hillary Clinton’s campaign and was “part of Russia and its government’s support for Mr. Trump”:

“I arrived at the meeting a little late. When I got there, the person who has since been identified as a Russian attorney was talking about the issue of a ban on U.S. adoptions of Russian children. I had no idea why that topic was being raised and quickly determined that my time was not well-spent at this meeting. Reviewing emails recently confirmed my memory that the meeting was a waste of our time and that, in looking for a polite way to leave and get back to my work, I actually emailed an assistant from the meeting after I had been there for ten or so minutes and ‘Can u pls call me on my cell? Need excuse to get out of meeting.’”

Kushner goes on to say he had no contact after that meeting with anyone from Russia until after the election. He details one other particular incident, where he says he received an email from a hacker asking for “52 bitcoins” to not release President Trump’s tax returns:

“There was one more possible contact that I will note. On October 30, 2016, I received a random email from the screenname ‘Guccifer400.’ This email, which I interpreted as a hoax, was an extortion attempt and threatened to reveal candidate Trump’s tax returns and demanded that we send him 52 bitcoins in exchange for not publishing that information. I brought the email to the attention of a U.S. Secret Service agent on the plane we were all travelling on and asked what he thought. He advised me to ignore it and not to reply—which is what I did. The sender never contacted me again.”

Kushner also describes two meetings he had during the Trump transition. First, a meeting with Ambassador Kislyak, followed by a second meeting with a man Kislyak insisted he should meet. As for the first meeting, where it was reported that Kushner raised the possibility of “backchannel” communications, Kushner denies this happened:

“Nothing else occurred. I did not suggest a ‘secret back channel.’ I did not suggest an on-going secret form of communication for then or for when the administration took office. I did not raise the possibility of using the embassy or any other Russian facility for any purpose other than this one possible conversation in the transition period. We did not discuss sanctions.”

Kushner says that his second meeting was with a man named Sergey Gorkov and was of little consequence, adding that in no way did he discuss any matters regarding his personal businesses.

Kushner concludes that he hopes these disclosures purs “these matters to rest.” According to the Washington Post, Kushner will not be under oath when he testifies today.