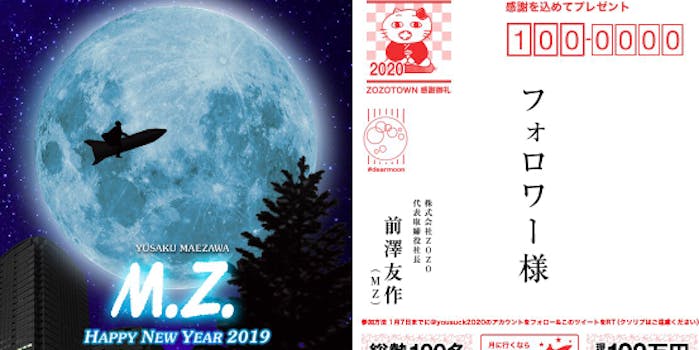 His tweet was to celebrate his brand hitting 10 billion yen.

Japanese billionaire Yusaku Maezawa has broken a new record as the most retweeted tweet of all time. Maezawa is the founder of Japan’s largest online fashion retailer, ZOZO. His tweet was to celebrate his brand hitting 10 billion yen ($92 million) in sales during the holiday season by giving away 100 million Japanese yen ($920,000) to 100 people who retweeted his tweet.

The previous record was held by Carter Wilkerson, a teen who attempted to get 18 million retweets in exchange for unlimited chicken nuggets from Wendy’s in 2017.

Many people retweeted the tweet in hopes of winning the cash.

Others commented on his new record. “Move over chicken nugget kid, there’s a new sheriff in ZOZOTOWN,” one person joked.

This isn’t the first time Maezawa has made headlines. He was announced as Space X CEO Elon Musk’s first paying customer for the Big Falcon Rocket’s launch into space. He plans to bring up to eight creative people on his expected 5-day journey in 2023.

Maezawa tweeted saying he picked a winner yesterday but wants to do a second round of giveaways.

Look out for his next giveaway. You could be one of the lucky winners!