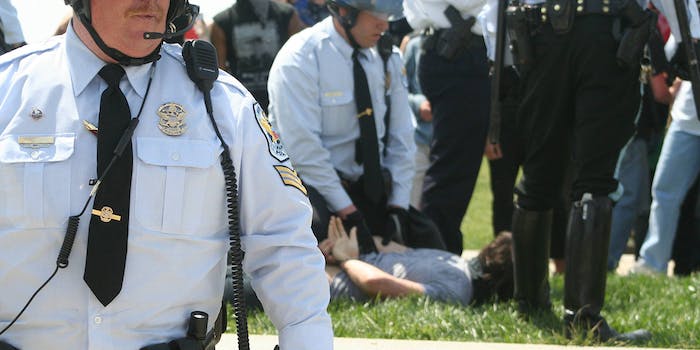 'There’s a perception that police are less likely to do the marginal additional policing that suppresses crime.'

FBI Director James Comey said Wednesday he believes a “viral video effect” causes weak police work and could be “at the heart” of a spike in violent crime in some American cities.

“There’s a perception that police are less likely to do the marginal additional policing that suppresses crime—the getting out of your car at 2 in the morning and saying to a group of guys, ‘Hey, what are you doing here?’” he told reporters at FBI headquarters.

With the spread of smartphones, high quality video of police work has become common on the Internet. Since 2014 especially, violent confrontations between police and civilians have increasingly gained a spotlight in national media, raising a sustained debate about the issue of police brutality.

One of the most noteworthy was the killing of Eric Garner in New York by police officers over an incident involving the illegal sale of cigarettes. Under a chokehold and surrounded by officers, Garnet’s last words were “I can’t breathe.” The incident became worldwide news and sparked protests. An NYPD investigation blamed Garner’s death on police conduct but no charges were ever filed.

Comey spoke to reporters after being briefed on crime statistics from 40 major cities, most of which saw an increase in murders, he said.

“I was very worried about it last fall and I am in many ways more worried,” Comey told reporters at FBI headquarters. “The numbers are not only going up, they’re continuing to go up faster than they were going up last year. And I worry very much it’s a problem that most of America can drive around. … I don’t know what the answer is, but, holy cow, do we have a problem.”

“It’s again happening in certain parts of the cities and the people dying are almost entirely black and Latino men and we can’t drive around that problem,” he said.

Comey singled out Dallas, Chicago, and Las Vegas but said other cities have seen no uptick in crime. These statistics will be released to the public in the near future.

“He ought to stick to what he knows,” James O. Pasco Jr., executive director of the National Fraternal Order of Police, told the New York Times. “He’s basically saying that police officers are afraid to do their jobs with absolutely no proof.”

Last time Comey brought up this notion, in the fall, the Obama administration distanced itself from the idea. No one from the administration has commented yet on this subject.

“I don’t know for sure,” Comey said. “Something has happened.”

Last year, a Times report titled “Murder Rates Rising Sharply In Many U.S. Cities” made waves around the country.

Congressional analysis from last year said violent crime was not rising, though it was too early to judge any long-term trends.