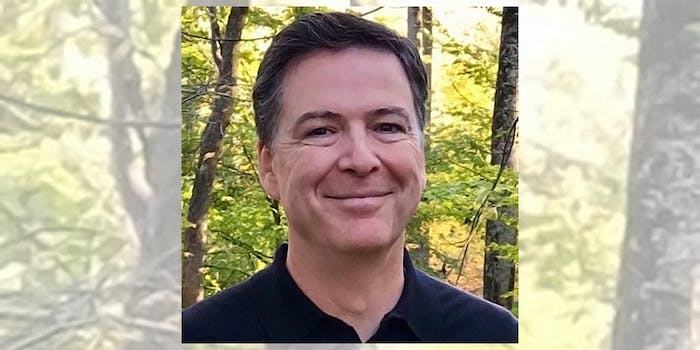 The worst kept political-Twitter secret is over.

The worst-kept Politics Twitter secret is over: James Comey is officially on Twitter—with a verified badge and new handle to prove it.

“Here’s my new handle. Glad to be part of the Twitterverse. Grateful to Reinhold for the cover these last few years,” Comey wrote on Monday.

Here’s my new handle. Glad to be part of the Twitterverse. Grateful to Reinhold for the cover these last few years.

Comey’s use of Twitter has been the subject of speculation for the past year after a Gizmodo report revealed that an account named @projectexile7 belonged to the then-director of the Federal Bureau of Investigation.

Since then, Comey has been less secretive about his use of the social media platform, posting pictures of himself and even subtle jabs at President Donald Trump on an account called @FormerBu. The account also used the name “Reinhold Niebuhr,” a theologian whom Comey apparently admired, in its profile.

As of Monday the @FormerBu account is still up, stripped of all but a few hundred of its old followers and has a typo in the bio section. Comey has shifted to a new account, @Comey, where he retains nearly 250,000 followers.

Trump fired Comey in early May, setting off a chain of events that formed a dark cloud over the White House. After Comey’s surprise ouster, Deputy Attorney General Rod Rosenstein appointed Robert Mueller, Comey’s predecessor at the FBI, to begin a sprawling investigation into Russian interference in the 2016 election and other related matters—including whether Trump obstructed justice by firing Comey.

“Lordy,” we hope there is more where that came from.