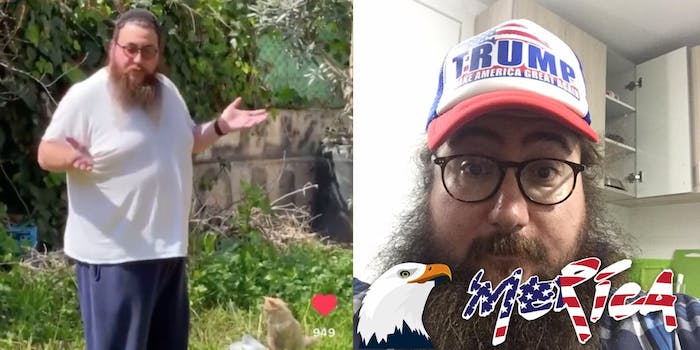 'From his public posts, I found a party animal, Kahanist, Trump-supporter, and COVID-truther.'

A New York man who sparked widespread criticism last month after reportedly occupying a Palestinian woman’s home is back in the spotlight after his social media accounts were discovered online.

Jacob Fauci, a Jewish man originally from Long Island, went viral in late April after moving into the home in East Jerusalem.

“Even if I get out of the house, it won’t be returned to you,” Fauci said.

In an interview with VICE, the Palestinian woman said the home was built by her father 21 years ago but was later sealed by a judge over the fact that it had been erected without a permit.

“Both my father and my mother worked and saved to build this house. Blood, sweat, and tears,” she said. “And then the Israeli court issued a decree allowing settlers to live in it.”

Fauci was relocated to the home in Sheikh Jarrah by the settler organization Nahalat Shimon International. The group works to remove Palestinians from the East Jerusalem neighborhood and replace them with Israeli settlers.

Now, more information on Fauci has been revealed after a Twitter user uncovered the man’s social media accounts. Fauci is being described as everything from a “party animal” and “Trump-supporter” to “COVID-truther” and “Kahanist”—a follower of the ideology popularized by Rabbi Meir Kahane that calls for a Jewish theocratic state.

In one Facebook post from 2014, Fauci advocates for using nuclear weapons against Gaza. Other posts show him adorned in merchandise from former President Donald Trump.

“He nicknames himself the Kalashnikover Rebbe (Rabbi of Kalashnikov) and loves the attention he’s getting from being the face of Palestinian explusion [sic] in East Jerusalem,” the Twitter user added.

The discovery comes amid heightened tensions between Palestinians and Israelis. A ceasefire was put in place last Friday between the Israeli government and Hamas after intense clashes resulted in hundreds of deaths.

At least 212 people in Gaza are reported to have died as a result of Israeli airstrikes. Israeli officials say 12 people died due to rocket fire from Hamas.