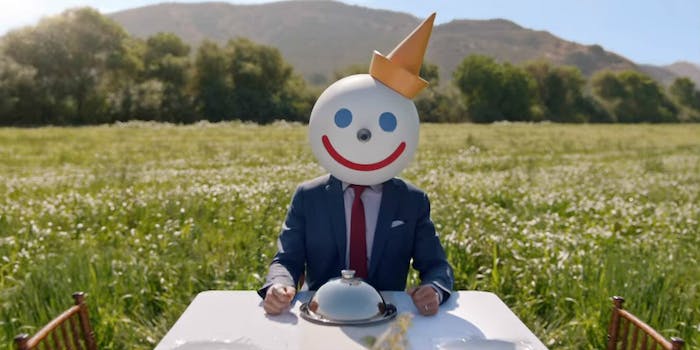 Carl's Jr., Hardees, Wendy's, and McDonald's may do the same.

The CEO of Jack in the Box is open to replacing humans with robots if it means keeping his greasy burger joint from shutting down.

Leonard Comma said at a conference on Tuesday that it “just makes sense” as the cost of labor rises due to increasing minimum wage, aka the bare minimum dollar amount people need to live. In 2018, 18 states will increase worker’s minimum wage, including California, the home state of the troubled burger restaurant. There, wages will be raised to $11 and up to $15 by 2023.

Don’t expect the hyperrealistic humanoid Sophia to be serving you anytime soon. Jack in the Box would take a more realistic approach by replacing cashiers with electronic kiosks, among other technologies. It has been experimenting with automated checkout stations since 2009 and found that they increase efficiency and revenue. However, Comma says the kiosks aren’t worth the price of installation. But that could soon change as the cost of employing humans rises and the price of purchasing and maintaining machines drops.

Jack in the Box joins a growing list of fast food chains and restaurants experimenting with ways to replace humans. Comma’s comments eerily echo those of Andy Puzder, the CEO of Carl’s Jr. and Hardees. In an interview with Business Insider, Puzder said he’s keen on replacing employees with robots because, unlike humans, they are “always polite, they always upsell, they never take a vacation, they never show up late, there’s never a slip-and-fall, or an age, sex, or race discrimination case.”

Even mainstream fast food places like Wendy’s and McDonald’s are testing out ways to implement self-service kiosks, though they’ve been careful not to worry current employees. McDonald’s was even forced to deny any intention of replacing robots with humans, a move some speculated would result in mass layoffs. It did, however, say it would reallocate staff to customer-service jobs.

The consequences of automation are a problem that will soon hit every industry as advances in technology make robots less expensive and more effective. At this point, you’re probably wondering if your job is at risk? This website will show the percent likelihood of you losing work to a robot. But before you give it a try, beware, you won’t like what you see.