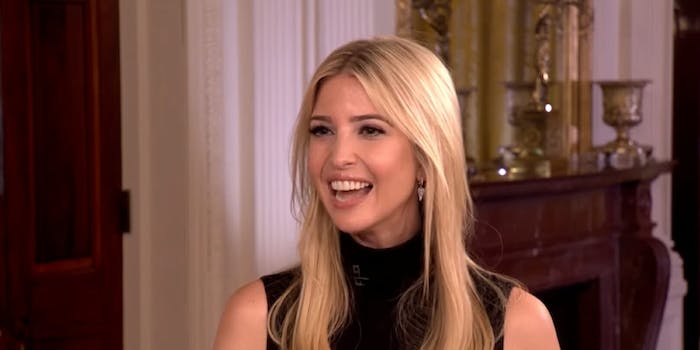 Earlier this month Ivanka Trump, the daughter of President Donald Trump, said during an interview that she and her husband Jared Kushner did not get special treatment when receiving their security clearances.

“The president had no involvement pertaining to my clearance or my husband’s clearance, zero,” she said, adding that there was a “back log” of clearances.

… the @nytimes is reporting trump ordered officials to give kushner his security clearance. but here's video from 20 days ago of ivanka trump repeatedly denying the president had anything to do with it. pic.twitter.com/e59YnKMxDp

However, a new report from the New York Times on Thursday seems to contradict what the president’s daughter said. The Times reports that the president ordered then-Chief of Staff John Kelly to issue Kushner a security clearance, despite misgivings from government officials.

The order came last May, according to the report, when the president had Kelly grant Kushner a security clearance despite then-White House counsel Don McGahn recommending against it.

Kelly, unhappy with the situation, reportedly wrote a contemporaneous memo about how he was “ordered” to give Kushner the clearance. McGahn also wrote a memo, according to the report. The Times cites four people who were briefed on the matter in its report.